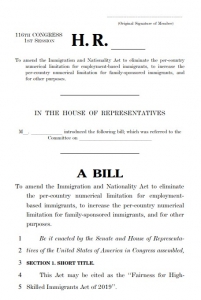 The bill will amend the Immigration and Nationality Act (INA) to eliminate the per-country caps to all employment-based immigrant visa categories, including EB-5.

“In the past year alone, the EB-5 program is responsible for over $3 billion in new economic development and over 100,000 jobs in the United States. Not excluding EB-5 from this proposal will put this type of new investment at risk,” stated Grau.

“We have opened the lines of communication to Congressional leaders and look forward to working with them in finding a legislative solution to continue EB-5 investment and job creation in the United States, all while achieving their goals for the other categories,” Grau concluded.