RCBJ Retrospective: The Latest Analysis of What USCIS Looks For in EB-5 I-829 RFEs and Denials

In three previous articles, published in 2012, 2013, and early 2014, we analyzed and interpreted over 2,700 pages of I-829 EB-5 requests for evidence (RFEs) and denial notices released by U.S. Citizenship and Immigration Services (USCIS) in response to three separate Freedom of Information Act (FOIA) requests filed by Invest In the USA (IIUSA), the trade association of EB-5 immigrant investor regional centers. The I-829 responses in the previous requests ranged from 2008 to early 2013. In mid-2014 IIUSA received an additional 1,068 pages of I-829 responses.

This series of articles analyzes real USCIS responses to I-829 petitions. The materials re-leased in response to the four FOIA requests are instrumental in understanding how USCIS applies EB-5 law to specific factual situations in the I-829 context. As such, this series of articles aims to inform practitioners and potential immigrant investors of trends in USCIS adjudications and how those trends have developed.

The EB-5 visa program has existed for over two decades. Congress enacted the EB-5 program in 1990. At the time, the program granted lawful permanent resident status to immigrant investors who directly invested in and managed job-creating commercial enterprises. Since 1992, with enactment of the Immigrant Investor Pilot Program, potential immigrant investors could also invest through EB-5 regional centers. In 2012, Congress reauthorized the regional center program through September 30, 2015. Today, there are nearly 600 approved EB-5 Regional Centers. By comparison, there were only twenty-five EB-5 regional centers in 2006. The EB-5 program is growing in multiple ways: geographically, investor interest is now coming “from all corners of the globe,” and EB-5 filings have increased year over year for the past several years. In fiscal year 2013, the U.S. government issued 8,564 EB-5 visas.

As background, a potential EB-5 recipient must first file an I-526 petition for classification in the EB-5 category. Upon USCIS’s approval, the investor becomes a conditional resident for two years. Potential EB-5 recipients must undergo a procedure to remove conditions at the end of this two-year conditional period. The procedure is analogous to that followed by people who obtain conditional residence through marriage to a U.S. citizen or lawful permanent resident. The petition to remove conditions is filed on form I-829 and submitted to USCIS’s California Service Center. This petition must be accompanied by evidence that the applicant has fulfilled all requirements of the EB-5 program, including that the applicant has invested the required capital and that the investment created or will create ten full-time jobs for U.S. workers. The applicant may prove that the jobs were created by including payroll records, relevant tax documentation, and Forms I-9. The I-829 form must also prove that the applicant has “substantially met” the capital investment requirement and has continuously maintained his or her investment during the conditional two-year period.

In May 2013, USCIS issued an EB-5 Adjudications Memorandum clarifying the goals of the EB-5 program. The EB-5 program has three essential elements: “(1) (t)he immigrant’s investment of capital, (2) in a new commercial enterprise, (3) that creates jobs.”  Each of the requirements for removal of conditions is tied to these three elements.

We reviewed the I-829 RFEs and denials released by USCIS to IIUSA in July, 2014 (the fourth FOIA response). This FOIA response did not include investors’ responses to the RFEs or any motions to reopen following I-829 denials. Therefore we do not know the ultimate outcome of the cases.

If USCIS denies an I-829, there is normally no appeal to the agency’s Administrative Appeals Office (AAO) unless USCIS itself certifies the case to the AAO. After an I-829 denial USCIS terminates an EB-5 investor’s status and issues a notice to appear before an immigration judge in removal proceedings. If an immigration judge rules against the investor, the investor can appeal to the Board of Immigration Appeals and then to federal court. We are not aware of any BIA decisions concerning EB-5 investors.

We classified the I-829 materials by issue type focusing on the same six issues as our previous articles: (1) job creation; (2) sustaining the investment, (3) redemption; (4) pooled trust, (5) business plan; and (6) material change. As in previous articles there were also some miscellaneous issues. In addition, some responses were so heavily redacted that it was impossible to identify any issue. These responses were classified as “No Issue.”

We aggregated the 245 case responses from the latest FOIA request responses and coded them into an Excel document called “I-829 cumulative Excel 8.28.14.xslx.” We preserved the 509 case responses from the earlier FOIA requests (167, 302, and 40 responses, respectively) and incorporated them into this Excel document as well. Finally, we aggregated the data from the four requests to show trends over time. We used pivot-tables and pivot-charts to map the trends, one of which is re-produced below.

USCIS I-829 RFEs and denials in the latest FOIA response typically identified one or more of the following issues: job creation, sustaining the investment, redemption, miscellaneous, material change, and business plan. There were no pooled trust issues in the latest FOIA response. The high prevalence of job creation mirrors a USCIS trend. This is unsurprising given the goals of the EB-5 program discussed above.

Some cases contained multiple issues. Job creation issues typically arose where there was a problem with the I-9 forms or other employment verification evidence was missing. In several cases, fraud or feared fraud was the issue. This is unsurprising. In the words of USCIS Ombudsman Maria Odom, “[EB-5] (p)rogram integrity is critical, and the agency should use existing USCIS Fraud Detection and National Security resources to identify and take action as warranted.”

USCIS requests for evidence in I-829 petitions tend to request the following evidence to support the investor’s claim that he or she has maintained his or her investment in an ongoing business creating jobs:

USCIS frequently states the following in I-829 RFEs about job creation:

USCIS understands that an employer is not expected to know with-out absolute certainty whether a document is genuine or not. However, with the filing of a petition before USCIS seeking benefits for aliens, the employer should follow appropriate guidelines in determining whether or not the evidence submitted for benefits meets the regulatory guidelines needed to be granted the benefit. In this instance, as noted above, the information provided with the filing of the instant petition does not meet EB-5 guidelines.

The creation of 10 full-time jobs for qualified employees is one of the criteria that need to be met. Employing individuals who are not qualifying employees and/or may have obtained their evidence through fraudulent means does not meet the criteria established for the creation of 10 full-time jobs or qualified employees through investment. Thus, although it is not a requirement for an employer to verify the status of an employee it seeks to hire through E-Verify, if the employer wishes to seek an immigration benefit for an individual by filing a petition before USCIS, it is recommended that the employer determine that the evidence presented for employment and later with the filing of a petition before USCIS meets EB-5 guidelines.

USCIS appears routinely to check various databases in I-829 adjudications, including the following: 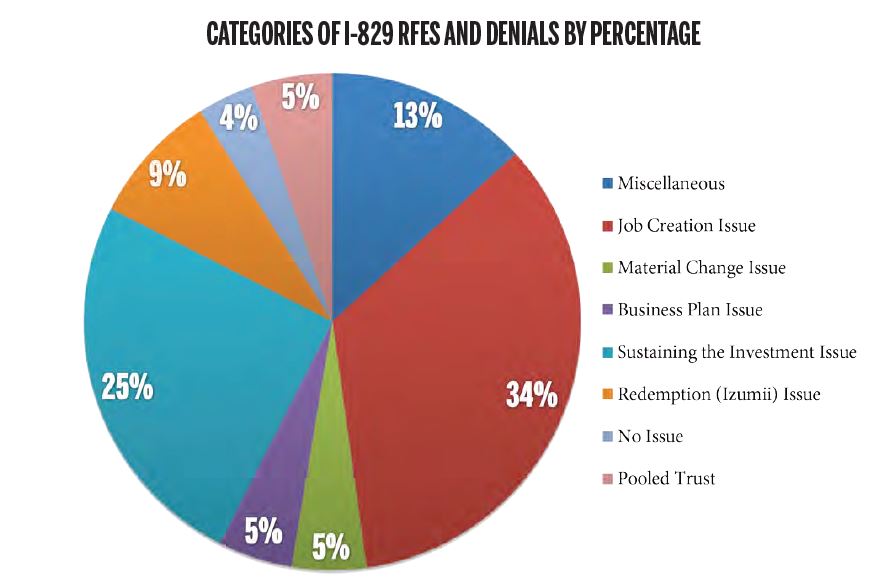 Biometrics Requests and other issues in the fourth FOIA response

Numerous I-829 RFEs and denials issued in 2013 concerned the failure to supply updated biometric information. These RFEs and denials concerned investors in the Chang class action litigation. That case, filed in 1998, challenged the retroactive application of new rules applied by the legacy Immigration and Naturalization Service to EB-5 investors. The Ninth Circuit ruled in 2003 that the agency could not apply its new EB-5 interpretations retroactively to investors who had already obtained conditional resident status. The case was eventually settled fifteen years later, in March 2013. The settlement agreement provided for the approval of I-829s for class members, contingent upon the completion of certain conditions, including the submission of updated biometric information for criminal and national security background checks. If Chang class members failed to supply their biometric information, RFEs, and then denials, followed. In our view, the RFEs and denials relating to the Chang case were a one-time event and are not relevant in analyzing general I-829 trends.

Somewhat more surprising in the latest batch of I-829 RFEs and denials was an in-crease in RFEs on sustaining the investment. However, often there was not much information as to why that issue arose in a particular case. Many RFEs simply consisted of the same boilerplate language asking for additional information, such as updated K-1 annual statements.

A few miscellaneous issues arose because the applicant was already an unconditional permanent resident by the time their I-829 petition was reviewed. In several of those cases, the EB-5 investor had invested in one EB-5 project that ran into difficulties, with-drew their money, and invested in a second EB-5 project. They then obtained an I-829 approval in the second project. They apparently failed, however, to withdraw their first I-829 petition.

Cumulatively, this series of articles analyzed 754 USCIS responses from a six-year period ranging from 2008 to early 2014. The most prevalent issue, as in our previous articles, overall was job creation. Overall, job creation issues arose in 34% of the I-829 RFEs and denials that we reviewed. Although the percentage of job creation issues fluctuates from year to year, job creation has always been the most prevalent issue, except in 2013. Most job creation issues arose due to verification of employment eligibility and full-time/part-time job status. In particular, USCIS seriously reviews the forms I-9, Alien Registration Numbers, Birth Certificates, Passports, I-551 cards, and other documentation provided to support employment eligibility. It is in the best interests of practitioners and potential investors alike to keep accurate records and submit as much supportive evidence as possible to avoid an RFE. Similarly, UCSCIS routinely does a spot check of full-time/part-time status by calculating full-time wages (using the State minimum wage times the mini-mum number of hours a week to be full-time) and comparing these wages to the evidence.

All other issues (miscellaneous, material change, business plan, redemption, pooled trust, and no issue) occurred at relatively similar rates. Given the small differences between the rate of occurrence of these issues in the six-year period and 754 cases, it is statistically impossible to differentiate the relative importance of each of these issues.

In total, IIUSA’s four FOIA requests resulted in the cataloging of 754 USCIS I-829 RFEs and denials. Although some years had smaller samples than others, certain trends have remained constant in the six-year cross-section these FOIA requests encompass. It is clear, for example, that job creation is the most prevalent issue in USCIS RFEs and denials.

Given the goals of the EB-5 program, it is no surprise that USCIS views the job creation requirement seriously. Practitioners and potential investors alike should bear in mind USCIS’s commitment to integrity and its searching review for fraud, particularly when verifying employment eligibility. Similarly, sustaining the investment has consistently appeared as the second most prevalent issue.

Nevertheless, current trends may differ from what we found in the data. This latest FOIA contained cases adjudicated as recently as January, 2014. However, since then USCIS has approved over 800 and denied nearly 100 I-829 petitions. Moreover, as of June 30, 2014, USCIS had a backlog of nearly 1,800 I-829 petitions. Thus, our sample of 754 cases continues to graze the surface of USCIS EB-5 I-829 adjudications, especially given the lack of follow-up responses to RFEs. However, the responses reveal a glimpse at USCIS’ EB-5 priorities in I-829 adjudications. ■