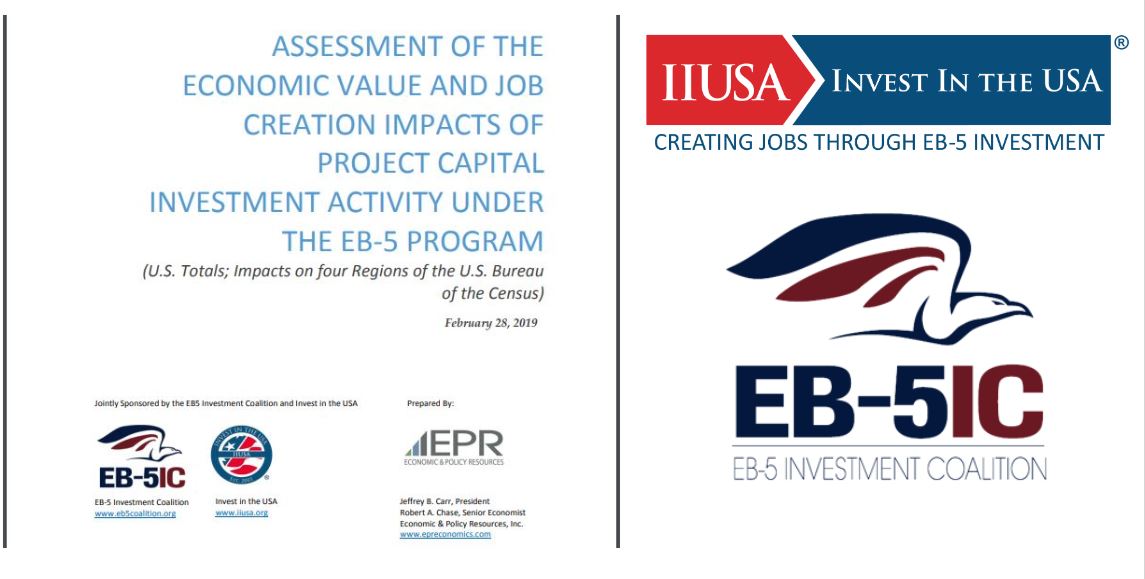 Washington, D.C. – The EB-5 Investment Coalition (EB-5IC), in cooperation with Invest in the USA (IIUSA), today released a new study on the economic impact of the EB-5 Regional Center Program finding a total of $10.98 billion of capital investment in EB-5 projects throughout the U.S. supported more 355,000 U.S. jobs, roughly 6 percent of all job gains over a two-year period.

“Economic activity and job creation effects of this scale represent a call to the EB-5 industry and legislative policymakers to take action,” said Jeffrey Carr, one of the report’s co-authors and President of EPR. “Absent that action, the economic contributions quantified in this study will merely represent ‘lost opportunity’ for the U.S. economy. Tens of billions of future foreign investment dollars and hundreds of thousands of new U.S. job opportunities hang in the balance.” Robert Chase, Senior Economist at EPR, was the report’s other co-author.

The study also showed that businesses across all U.S. sectors benefited as a result of the regional center program’s capital investment activities, ranging from construction and engineering, manufacturers and utilities, to healthcare and educational services.

“The EB-5 visa program is an undeniable economic development engine and job creator,” Aaron Grau, IIUSA Executive Director said. “IIUSA is proud of the work its members do and the return EB-5 investors receive. We are equally proud to work with our industry partners to demonstrate EB-5’s value and illustrate the need to reform and extend the program.”

“I’ve seen how this investment tool invigorates rural and urban communities from California to Washington, DC,” said Angelique Brunner, Founder and President, EB5 Capital and EB-5IC Industry Membership Chair & Spokesperson. “We have long advocated for the reforms necessary to improve and sustain the EB-5 program over the long term, and this study should serve as a clarion call for those within our industry and policymakers in Washington to move with speed to find consensus on real, workable reform.”

Founded in 2005, Invest in the USA (IIUSA) is the national membership-based 501(c)(6) not-for-profit industry trade association for the EB-5 Regional Center Program. Its members account for the vast majority of capital formation and job creation in the U.S. resulting from EB-5 investments.

About The EB-5 Investment Coalition

The EB-5 Investment Coalition (EB-5IC) is a broad-based, bipartisan organization of businesses, industry leaders, trade associations and elected officials mobilizing around the shared mission of putting Americans to work by reauthorizing and strengthening the critical EB-5 Regional Center Program. EB-5 investments have funded job-creating projects in all 50 states and across a broad range of industries, including health care, education, manufacturing, energy, agriculture, retail, hospitality, transportation, infrastructure, and real estate. As a coalition, EB-5IC is united in its conviction that America cannot afford to sit on the sidelines in today’s increasingly competitive global economy. For more, visit eb5coalition.org.