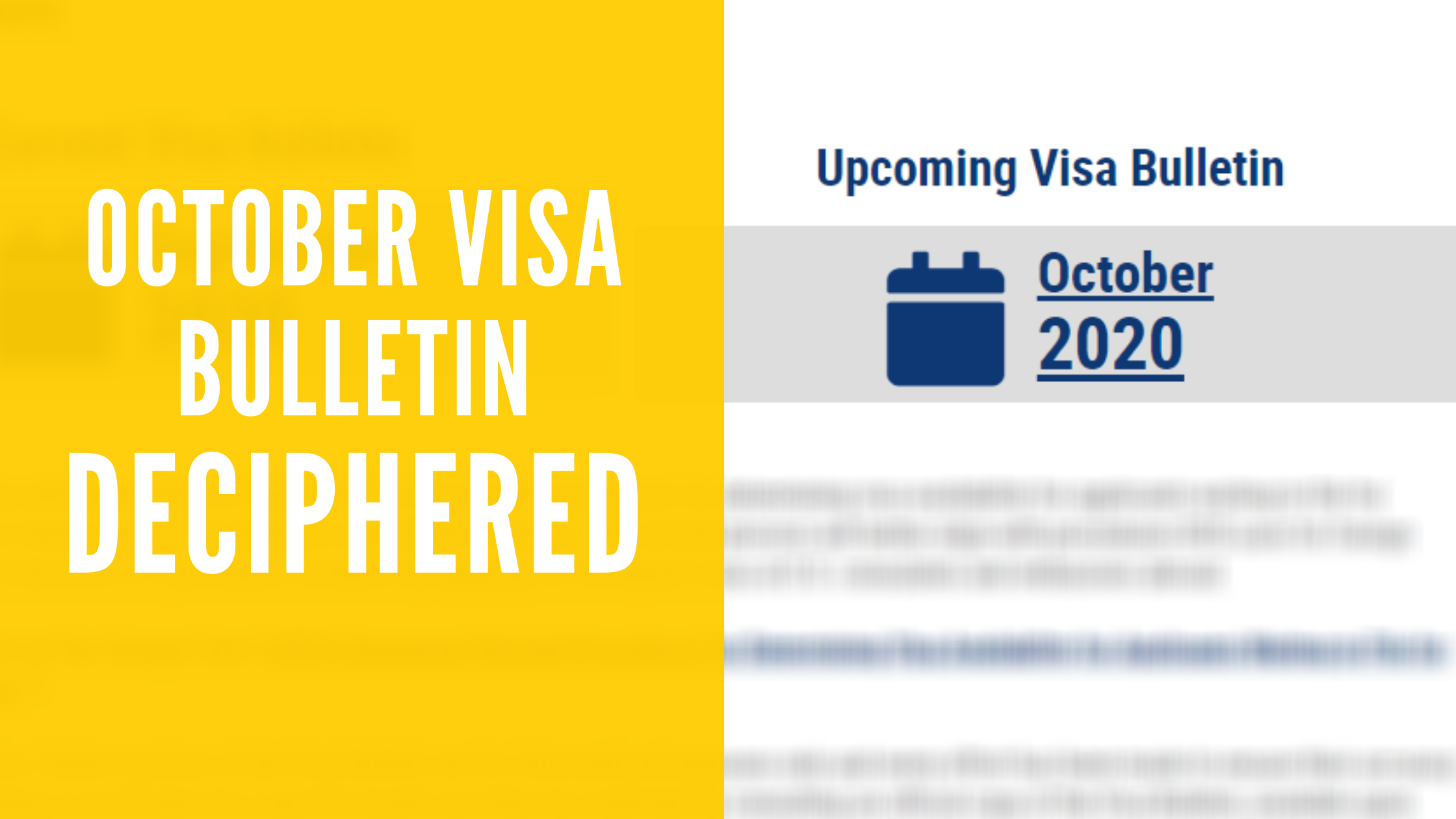 The information contained in this analysis is for educational purposes only and should in no way be construed as legal advice. Any opinions expressed belong solely to the authors.

What Did the October 2020 Visa Bulletin Tell Us?

As the first Visa Bulletin for fiscal year (FY) 2021, the October 2020 Visa Bulletin unveiled critical information for EB-5 visa availability in the new fiscal year. In particular, we learned:

Table 1 summarizes the EB-5 cut-off dates on the October 2020 Visa Bulletin. This analysis will decipher important information from the Visa Bulletin in the form of question and answer:

Why Did the Visa Bulletin List “U” (Unauthorized) for the EB-5 Regional Center Visa Categories?

Once the legislation is signed by the President, the EB-5 final action dates in October would immediately have the cut-off dates for the non-Regional Center categories, which are August 15, 2015 for mainland China-born applicants; August 1, 2017 for Vietnam-born applicants; and “current” for applicants from all other countries.

How Did the October 2020 Visa Bulletin Movements Compare to the Past Openings of the Fiscal Year?

Specifically, the EB-5 cut-off date for Vietnam advanced 511 days between September and October in 2018 while the movement was even more significant in 2019 with an advancement of 724 days in October 2019. However, unlike the past two years, there was no movement for the Vietnamese EB-5 cut-off date in the October 2020 Visa Bulletin.

What Are the Statistics Showing Us?

Despite the lack of movement on the latest Visa Bulletin, the EB-5 cut-off dates for China and Vietnam advanced significantly in FY2020. In fact, as Figure 1 illustrates, the EB-5 final action date moved forward 297 days for China and 1,014 days for Vietnam during FY2020 (October 1, 2019 – September 30, 2020), while these movements were only 75 days for both countries during FY2019.

However, due to the ongoing suspension of immigrant visa services in the consular offices worldwide, the allocated EB-5 visa numbers were not fully used in FY2020. Based on the Department of State’s monthly immigrant visa issuances statistics, only 1,088 EB-5 visas were issued between October 2019 and August 2020 through the Consulate in Guangzhou (see Figure 2), down by 70% year-over-year even though the China EB-5 final action date experienced a rapid movement during that time period.

Why “No/Limited Forward Movement” for China/Vietnam Even as Employment Based Limits Are Enjoying an “All-Time High”?

The answer is no because we have ample demand at the current cut-off dates and consulates remain closed. Most Chinese and Vietnamese visa applicants consular process abroad rather than adjust status in the United States, unlike the applicants in the EB-1, EB-2, and EB-3 categories. In FY2019, more than 90% of EB-5 applicants from China or Vietnam were allocated numbers by visa processing at a U.S. consulate. In contrast, the percentages of applicants consular processing in the EB-1, EB-2, and EB-3 visa categories were only 5.5%, 8.7%, and 32.9% respectively. As a result, the windfall of additional EB-5 numbers will not meaningfully advance the China and Vietnam cut-off dates until consulates reopen.

A second key item of note is the actual extent of the windfall. The EB-5 category is not gaining a net addition of 8,600 visa numbers when taking into account the EB-5 numbers lost forever in FY2020 due to consular closures. Based on June 2020 estimates, the number of lost EB-5 visas was about 5,500. The visa issuance statistics also showed that only 2,497 EB-5 visas were issued between October 2019 and August 2020. We have reason to believe the number of potential EB-5 visas lost to be as high as about 6,000 in FY2020. If we deduct this number from the 8,600 numbers gained, we only have a net gain of about 2,600. See the figure below:

Considering about 6,000 EB-5 numbers were lost from about 7 months of consular closures, the 2,600 net gain can be dissolved in about 3 months, particularly if USCIS’s Form I-526 adjudications continue to be delayed. Combining this sobering estimate with the projection that there will be likely be “No forward movement” and “Limited forward movement” for China and Vietnam respectively until January 2021, the bottom line may be that the EB-5 category may experience no meaningful net gain despite the huge spillover from family-sponsored numbers.

Are There Any Winners?

The investors with immediate visa availability – that is, non-Chinese and non-Vietnamese investors – are more solid than ever in securing a visa number. Investors from countries whose visa usage had just exceeded or were creeping up to the per-country limit should also get relief this year from the threat of a Visa Bulletin cut-off date being established. These include India, South Korea, Taiwan and Brazil. India is in a particularly outstanding position because many Indian investors also may adjust in the United States, so they are unaffected by consular closures. Moreover, because India is no longer backlogged, USCIS should prioritize Indian cases in I-526 adjudication under its recent processing changes. The additional numbers are indeed a triple win for Indian EB-5 investors.

What About Hong Kong?

Are Hong Kong EB-5 visa applicants in the red zone or the safe zone? We do not yet know for certain the effects of the Hong Kong normalization Executive Order (EO). If Hong Kong investors will be added to the mainland China visa queue, there is no good news for them based on the October Visa Bulletin alone. If they are instead in the priority queue, they will be with the “rest of world” EB-5 applicants subject to consulates reopening. Based on our recent exchange with the Visa Office, we have reason to believe the Department of State will provide further clarification regarding the EO in the coming weeks.

Gaming out worst-case scenarios would include the possibility that prolonged consular closures would result in more countries eventually having backlogs earlier than they might otherwise. Let’s play this one out: This year, we will have ample numbers. But if consulates remain closed, even for non-backlogged countries, the approved cases will start to mount. As they stack up in the NVC queue with no release valve on the other end in the form of visas being issued, those cases will start to creep up to the per country limit. Therefore, the same countries that do not face the threat of a cut-off date this year, may experience an abnormally lengthy visa backlog in a future year unless the consulates resume normal operations soon.

We will need to tune in closely to consular re-openings and communications from the Visa Office. In the meantime, legislative efforts to keep unused FY2021 visas in their respective categories would be greatly beneficial. That measure would allow the gains to remain in EB-5 even if consulates remain closed and also avoid accelerated backlogs appearing in other countries.

ACKNOWLEDGEMENT: The authors would like to thank Mr. Charles Oppenheim, Chief of Visa Control & Reporting Division at U.S. Department of State, for answering our questions and providing his insightful comments on this important issue.