According to U.S. Citizenship and Immigration Services (USCIS) data, the EB-5 Program contributed $2.4 billion to U.S. Foreign Direct Investment (FDI) from Q1-Q3 down from $3.2 billion during the same time period in 2015. 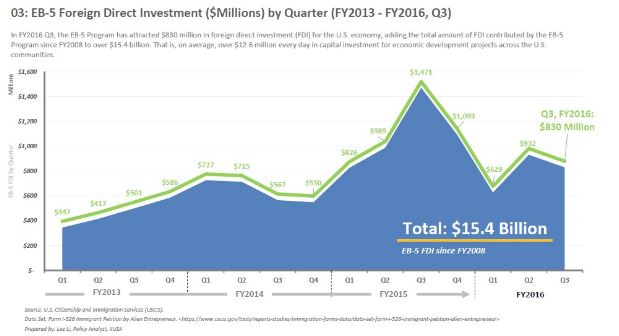 According to U.S. Citizenship and Immigration Services (USCIS), as of Q3 2016 there were a total of 19,406 pending I-526 petitions, which represents a 48% increase from this time last year. Yet, the total number of pending petitions continues to decrease from its all time high(21,988) in the first quarter of 2016.

The U.S. Department of State, Bureau of Consular Affairs released its revised Visa Bulletin for the month of January, revealing that for mainland-China born visa applicants, the cutoff date is March 8, 2014 moving up from the previous month’s bulletin.

As of December 6, 2016, USCIS has approved 865 regional centers. A full list of all approved Regional Center can be viewed here.

According to National Visa Center (NVC) statistics, as of November 2016, there were a total of 24,629 applications pending in the national visa office for the EB-5 visa category, representing a nearly 40% year-over-year increase from November 2015. Of the 24,629 EB-5 applicants on the waiting list 22,910 are from Mainland-China, which is 93% of all applicants.

According to unofficial U.S. Department of State data, EB-5 visa usage of Mainland China applicants accounts for 76% of the total EB-5 visa usages in FY2016, an almost 10% decrease from FY 2015. 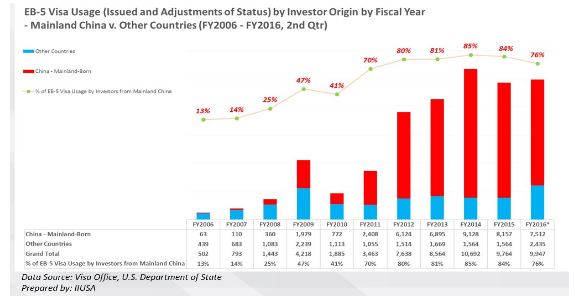 Earlier this year USCIS published a final rule in the federal register adjusting the fees required for most immigration applications and petitions, including the EB-5 Program. Under this final rule the fees increase by a weighted average of 21 percent and establish a new fee of $3,035 covering USCIS costs related to the processing of Form I-924A and increased fees for processing of Form I-526 and I-924. The new fees took effect 12/23/16.