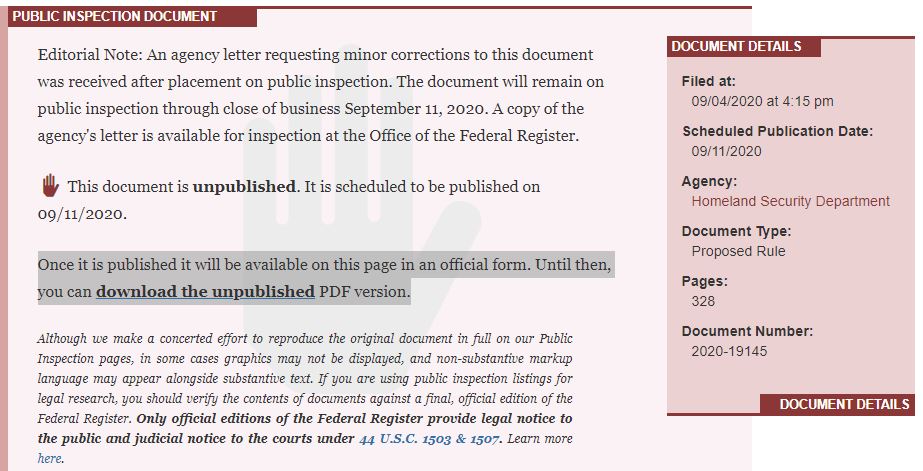 DHS is in the process of issuing a proposed regulation that expands the situations when it can require collection of biometrics, which already included fingerprint, photo, and signature and now would include iris image, palm print, and voice print. Under the proposal, USCIS will require biometrics from principals of regional centers, including people who have ownership, control, or beneficial interest in entities that are regional center principals. USCIS probably will require biometrics with any I-924 request or I-924A annual report from any principal from whom biometrics have not already been taken, but USCIS could specially require a principal to submit to biometrics even outside of the filing cycle. Consulates and USCIS already obtain biometrics from EB-5 investors in the process of adjudicating applications for immigrant visa or adjustment of status, and then I-829 petitions. The rule authorizes USCIS to take biometrics from investors filing I-526, but since most of them file from outside the U.S. and become fingerprinted in becoming a conditional permanent resident it seems unlikely that USCIS will actually require biometrics at the I-526 stage.

Under a recently finalized rule changing many USCIS filing fee amounts taking effect on October 2, biometrics costs will be incorporated into the filing fees. Thus, it appears likely that the $17,795 fee for I-924, which will remain unchanged, will include the costs of biometrics from regional center principals. The new $4,465 filing fee for a regional center’s I-924A annual report apparently will include biometrics fees. The new $4,010 I-526 fee would include fees for any biometrics USCIS will require. The new $1,130 fee for I-485 adjustment of status will incorporate biometrics fees, but now the initial and extension work and travel authorization applications (I-765 and I-131) will require filing fees totaling an additional $1,000. The new $3,900 I-829 fee apparently will incorporate biometric fees for the investor and participating family. Before October 2, USCIS will need to issue new instructions to all the forms to clarify the filing fees and whether any separate biometrics fees are required anymore, especially for Form I-829.

Below are excerpts from the 328-page proposal that USCIS has published in advance of its publication in the Federal Register, on Friday, September 11.
Comments to the proposed rule must be submitted within 30 days of formal publication (probably due October 11) through the Federal eRulemaking Portal at http://www.regulations.gov, identified by DHS Docket No. USCIS-2019-0007.

Read the Full Proposed Rule in the Federal Register

This document in Federal Register unpublished. It is scheduled to be published on 09/11/2020. Once it is published it will be available on this page in an official form. Until then, you can download the unpublished PDF version.