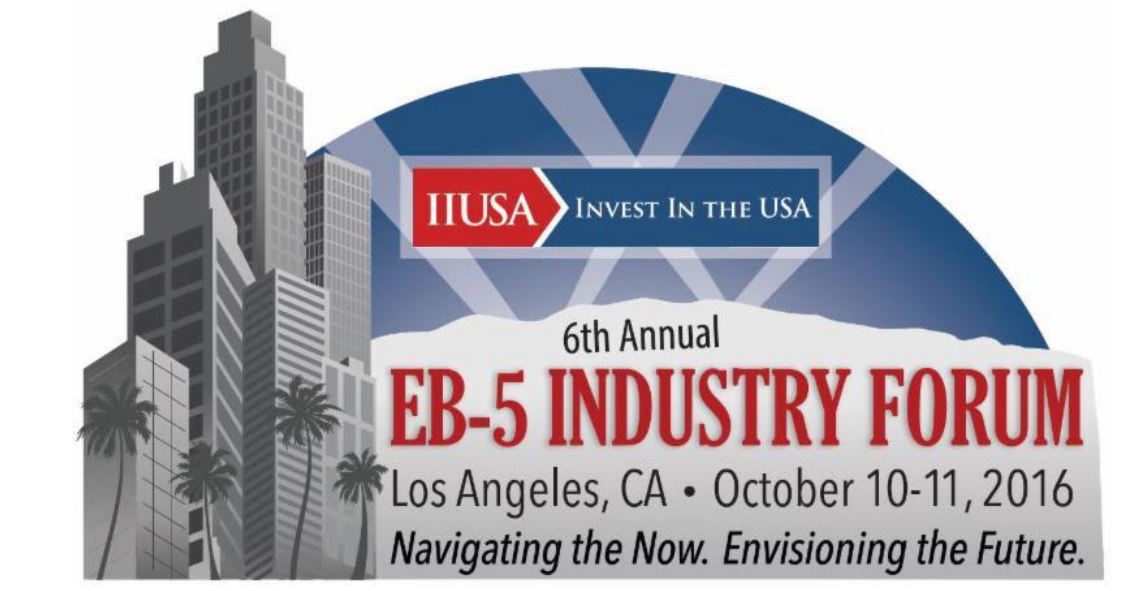 IIUSA cordially invites you to join over 400 of your industry peers at the 6th Annual EB-5 Industry Forum from October 10-11, 2016 in Los Angeles, CA. Attended by international investment and economic development professionals from around the world, the EB-5 Industry Forum will feature panels on legislative and regulatory activities that will shape the future of the EB-5 Program.

Here’s are just a few reasons why you should purchase your tickets today to join us in LA for next month’s conference:

Book Your Hotel Room by This Friday 9/30 for Group Pricing! 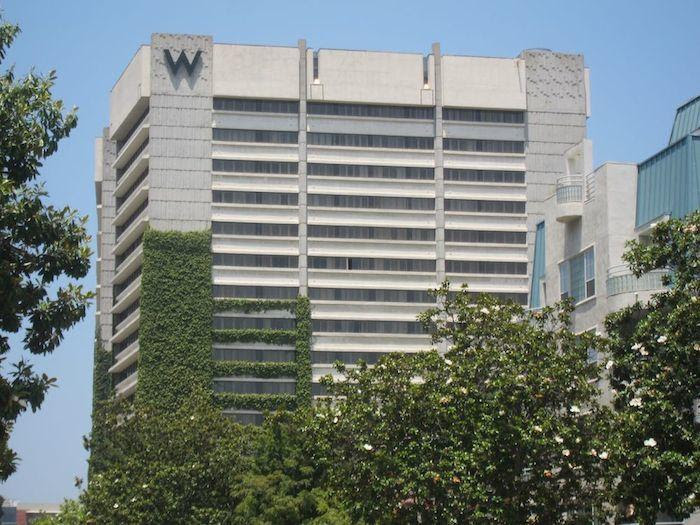 You still have time to take advantage of the special group rate of $299 per night at the W Los Angeles -West Beverly Hills , a ten-minute walk from the conference venue. Shuttle service will be provided to and from the hotel.

Julia Harrison, Deputy Chief, U.S. Citizenship and Immigration Services (USCIS), Investor Program Office (IPO) – Julia Harrison was named Deputy Chief of the USCIS Immigrant Investor Program Office in July 2014. With more than 20 years of experience with INS and USCIS, Ms. Harrison brings a wealth of program and operational experience to IPO. Most recently she served for four years as the Chief, Operations Division within the USCIS Field Operations Directorate. There, she led four branches in developing and implementing national policy, operational guidance, and training in many areas of immigration law including citizenship, family based immigration, national security, fraud detection and international adoption. Ms. Harrison previously served USCIS in many other capacities, including as the Field Office Director in Seattle, Washington for seven years, and prior to that, as a Supervisory Port Director and Supervisory Immigration Inspector.

Michele Layne, Regional Director U.S. Securities and Exchange Commission, Los Angeles Regional Office – Michele Layne has been the Regional Director for the Los Angeles office since 2012. Ms. Layne was an Associate Regional Director for Enforcement in the L.A. office from 2005 to 2012. She began her SEC career 21 years ago as a staff attorney in the Enforcement Division. Ms. Layne served as the Co-Acting Regional Director after the departure of prior office director Rosalind Tyson earlier in 2012. During her tenure at the SEC, Ms. Layne has worked on many significant enforcement cases involving a wide variety of securities law violations. Among the cases in which she has played a leadership role was the enforcement action against Countrywide CEO Angelo Mozilo that resulted in the largest SEC penalty ever paid by a public company’s senior executive, and the CSK Auto matter that marked the SEC’s first-ever Sarbanes-Oxley Act “clawback” case against an individual who was required to return bonuses and stock profits while not personally charged for the company’s misconduct. Ms. Layne received the SEC’s 2009 Distinguished Service Award, the agency’s highest honorary award.

Charles Oppenheim Chief, Visa Controls Office, U.S. Department of State – Charles Oppenheim has been employed by the Department of State since 1978. He has worked as a consular officer in the Bureau of Consular Affairs since 1979 and in 1999 became Chief of the Immigration Visa Control and Reporting Division. Mr. Oppenheim’s main responsibility is the administration of a complex series of annual numerical limitations on immigrants subdivided by preference category and country. The Visa Controls and Reporting Division Office issues a monthly bulletin, which summarizes availability of visas for the coming month and other visa related information.

Please use the form below to submit your questions to the panels, speakers, and guests of honor at IIUSA 2016 EB-5 Industry Forum.

If you would like to ask questions to multiple panels, please submit another response after your finish this one. 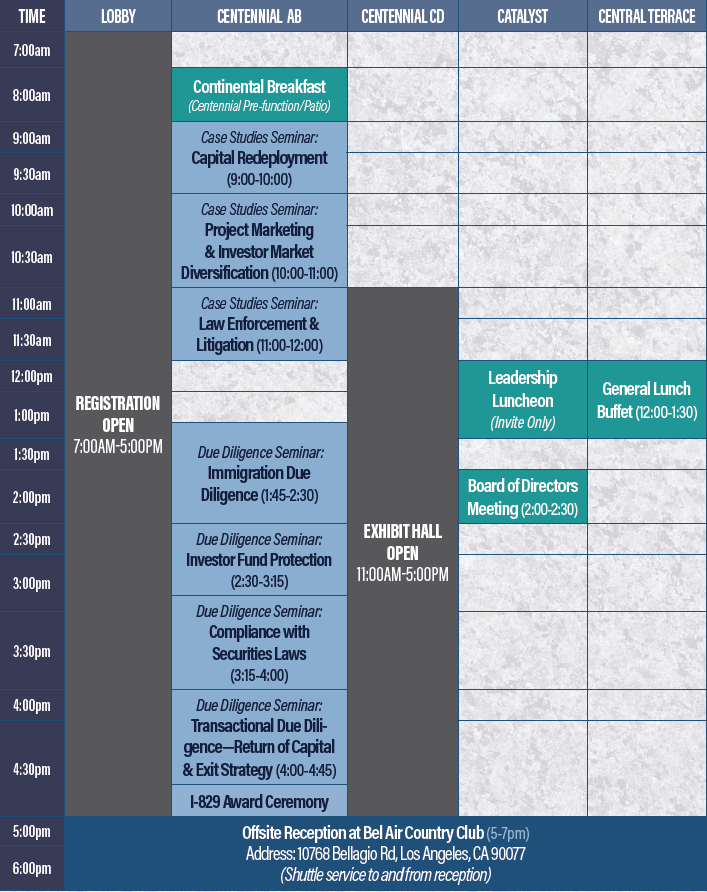 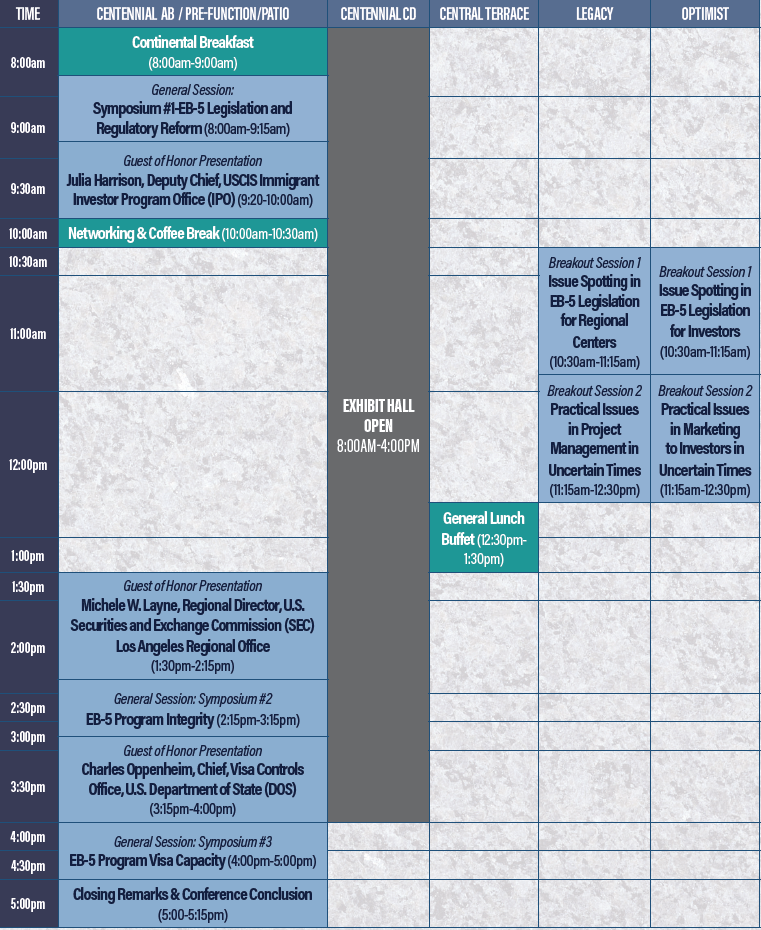 Thank you to Our Sponsors 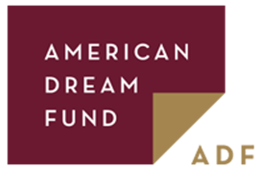 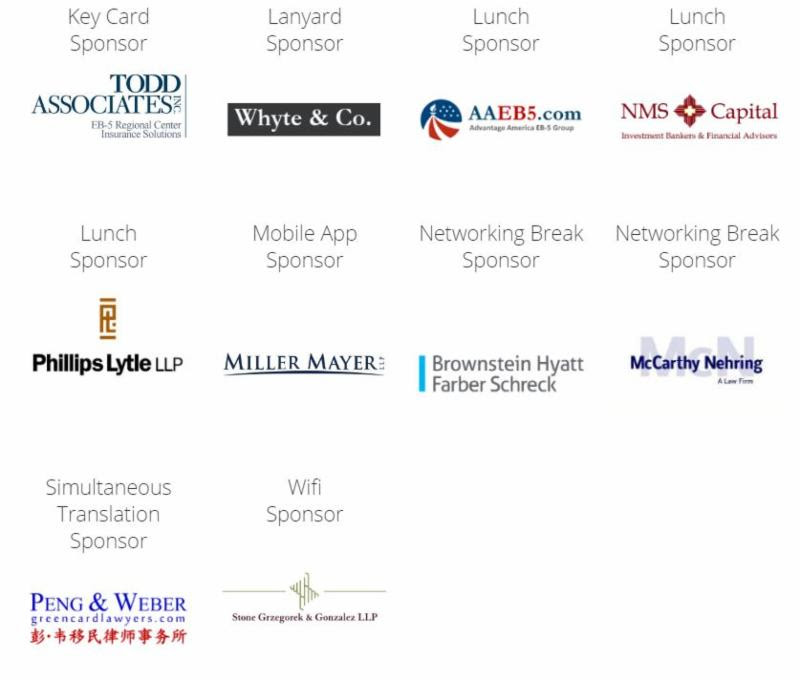 Special Thank You to the IIUSA Conference Planning Committee!

The Conference Planning Committee helps the IIUSA staff and leadership layout the agenda for the event, identify potential guest of honor speakers and welcome guests from all over the world. Thank you to the volunteers listed below!