The globalized world we live in today demands public policy that takes advantage of the fact that economic opportunity, capital, and people are crossing national borders at a record-setting, seemingly ever-increasing rate.  “Immigrant investor programs” are an example of this type of policy and exist all around the world, all competing for the same economic benefit of attracting entrepreneurial investors (of independent financial means) to their shores and each with a unique purpose once the capital is attracted.  The U.S. designed its immigrant investor program, the EB-5 Regional Center Program (the “Program”), to allocate that capital to regional economic development and U.S. job creation – and after 20 years of existence it has come of age in the 21st century.

Program utilization has grown exponentially since 2008, thanks in most part to the strong “post-recession demand” for “at risk” capital in the U.S. and the supply of unprecedented wealth that now exists overseas.  This new macroeconomic reality is the environment for which this innovative regional economic development policy was designed.  Investor demand more than doubled between fiscal year (FY) 2011 and FY2012 – accounting for approximately $2.0 billion in FDI in FY2012.  FY2013 demand trends indicate another record-breaking year ahead for the Program.  Since FY2005, the Program has accounted for $4.7+ billion dollars and the creation of over 95,000 American jobs with most of that activity occurring in the last few years.  The economic contribution of the Program continues to grow, every single day.

The data is clear: the EB-5 Program is an engine of regional economic development in communities all over the United States and in a diverse set of industries (i.e., assisted-living, commercial real estate, construction, education, energy, entertainment, infrastructure, healthcare, hospitality, logistics, manufacturing, transportation, and more).  Its economic contribution (in GDP growth, job creation, and local/state/federal tax revenue) can be maximized even further by supporting IIUSA’s advocacy platform – detailed below, including statistics.

IIUSA’s primary mission remains the permanent authorization of the EB-5 Regional Center Program so it can continue to create American jobs at no cost to the American taxpayer with certainty.  IIUSA requests Congress act in advance of the September 2015 “sunset” date to permanently authorize the Program.

The EB-5 Regional Center Program (the “Program”) will celebrate its 20th anniversary in August 2013 (Congress enacted the EB-5 Regional Center Program in 1992, with regulations promulgated in 1993).  In a strong statement of bipartisan support, the 2012 re-authorization of the Program through 2015 passed unanimously in the Senate and 412-3 in the House of Representatives.  Furthermore, the word “pilot” was struck from the statute when referring to the Program – setting the stage for the next Congressional authorization to be permanent!  No surprise given the historic U.S. job creation data from FY2012… 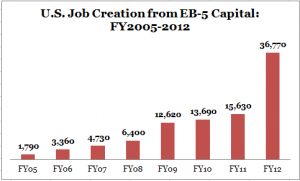 The last time a re-authorization of the Program was analyzed by the Congressional Budget Office, it was scored “revenue neutral,” meaning all costs incurred by the government in administering this program are offset by user fees.  That analysis did not include the tax revenues that result from the economic impact of the EB-5 investment and addition of high net worth individuals to the U.S. taxrolls based on worldwide income.  A 2010, USCIS-commissioned EB-5 Program evaluation estimated the annual tax revenue accruing from a fully utilized EB-5 Program  (3,500+ I-526 petitions approved in a year – which occurred in FY2012 and likely will again in FY2013) with the following results that total over $1.0 Billion/year: 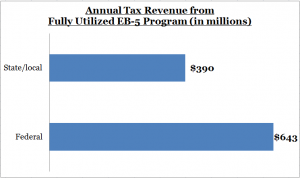 IIUSA supports any and all legislative reforms that will maximize the EB-5 Program’s economic impact in the United States, continuing its growth trajectory and maintain its place as the most utilized immigrant investor program in the world.

The current annual allocation of almost 10,000 visas to the EB-5 category is no longer sufficient.  The U.S. Department of State has already warned that current demand patterns indicate complete usage, and thereby backlog, of the current annual allocation of approximately 10,000 visas in FY2014.  The resulting backlog will abruptly interrupt the flow of capital through when current data shows all-time highs of:

IIUSA is engaged with the 113th Congress on all issues that would have an impact on the EB-5 Regional Center industry, particularly in the context of the “comprehensive immigration reform” debate.  Numerous ideas have emerged during previous efforts to reform the Program under the leadership of the Senate’s most staunch supporter of the Program, the Honorable Chairman of the Judiciary Committee, Patrick Leahy of Vermont.  The opportunity to modernize, and permanently authorize, the Program as part of larger policy reform is real – meaning effort must carefully be designed to nurture the industry’s growing economic contribution to the United States.

IIUSA’s Regional Center members account for approximately 95% of EB-5 capital formation and resulting job creation in the Program – with billions of dollars of capital deployed into their respective regional economies, in turn creating hundreds of thousands of American jobs.[4]  The success of our members working with the Program to capitalize economic development projects involves substantial planning to ensure that their investment structures, business plans, and economic impact reports meet the various requirements of the EB-5 Program.  All of these components are then thoroughly detailed in a private placement memorandum that discloses the risks associated with making the investment and marketed in compliance with U.S. securities laws.

Our members undertake this required and expensive endeavor under the expectation that there is a level of certainty and predictability in processing times.  Furthermore, our members fully understand that U.S. Citizenship and Immigration Services (“USCIS”) is a fee-based agency that requires filing fees to cover operational costs.  They are willing to pay the fees necessary to bring USCIS adjudication processing in line with commercial realities should insufficient resources be the cause of delay.

The pervasive processing delays currently being experienced by Program stakeholders is an unnecessary – yet fixable – threat to the EB-5 Program’s credibility worldwide at a time when the Regional Center industry is setting records in growth and total economic contribution to the U.S. economy.  For example:

In just the last month, IIUSA has collected over 500 receipt numbers for I-526 petitions from Regional Centers all over the country.  The processing times range from five to twenty-plus months.  This small sample of the total backlog of I-526 petitions represents over $250 million in pure EB-5 capital formation, which other capital investment relies upon to create American jobs.  The complete backlog of pending I-526 petitions, based on an analysis of USCIS FY2012 filing statistics, is likely in the thousands – representing potentially $1.B in capital formation that will result in the creation of over 40,000 American jobs – all at no cost to U.S. taxpayer.

IIUSA plans on continuing to collect receipt numbers to monitor the I-526 backlog.  With only 88,000 jobs created for the country as a whole in March 2013, it is imperative that the Administration does all it can to create more jobs in the future.  The EB-5 program can help, but only if USCIS adjudicates EB-5 petitions promptly.  IIUSA asks that to address the persistent uncertainty in the Program currently, USCIS demonstrate its commitment to responsive governance by implementing pro-economic growth administrative policies by establishing consistent and faster processing times for all EB-5 related petitions and engaging in transparent policy development through robust stakeholder engagement.

To achieve the goal of protecting the credibility of the Program, IIUSA respectfully offers the following “Top 5” recommended actions to USCIS for consideration:

1)     Expedite the adjudication of the thousands of EB-5 related petitions and applications (I-526, I-829, and I-924) that are still pending at the USCIS California Service Center (“CSC”).  It is imperative that the transition of EB-5 adjudications from CSC to the new EB-5 Program Office in DC be as seamless as possible – meaning it does not have a detrimental effect on the Program’s job creation outcomes.  Expediting adjudication of petitions already pending at CSC would be an excellent first step.

2)     Issue an I-797 approval notice for I-924 applications for “actual” projects. This approval notice, along with evidence that the documentation has not been changed, can then be submitted with each I-526, eliminating the need for adjudicators to review that documentation again.  This would allow this process to function in the streamlined manner that USCIS intended.  As introduced in May 2011 by USCIS, “specialized intake teams” should be immediately implemented to allow the differentiation between minor and major changes to a Regional Center designation.  USCIS should also adjudicate more quickly amendments seeking “pre-approval” of a specific capital investment project that is ready for EB-5 capital deployment.  Lastly, USCIS should be able to challenge information that it has previously approved only if there is evidence of fraud.

3)     Establish an official set of processing times for all EB-5 related petitions and stick to them.  Processing times must be proportional to the amount of work hours required to adjudicate the particular application/petition type and a meaningful system for I-924 applicants to check the status of their application be implemented (924s were not included in USCIS’ new “Case Check” web application.) Petitioners should be able to inquire when their application is outside of normal processing times.  USCIS should establish a separate queue with quicker processing times for: (a) I-924 applications to amend existing Regional Center designations (compared to I-924 applications for initial designation); and (b) I-526 petitions filed with documentation identical to previous I-526 approvals on the same EB-5 project, or an approved I-924 application that included an exemplar I-526 or actual economic development project.  Not having to re-adjudicate part of an application/petition after previous approval by USCIS applies to both I-924 amendment applications (“a” above) and I-526 petitions affiliated with business plans and documents identical to a previously approved application or petitions (detailed in “b” above).  Currently, there is no way to check on the progress on I-924 adjudications like the “case status” web application for I-526 and I-829 petitions.

4)     Limit all additional evidentiary requests to one RFE per case and issue a single RFE when there is a question about the Regional Center business plan and/or economic model, while holding adjudication of subsequent investor petitions in the same project until the issues are resolved.  Current USCIS practice is to issue identical RFEs to every investor in the project, duplicating efforts by all parties involved in responding to and adjudicating the various responses.

5)     Finalize and implement the comprehensive EB-5 adjudications guidance.  Now in its third draft, the EB-5 Adjudications Policy memorandum is ready for implementation.  It represents an important step forward in predictability by having all adjudications policy consolidated into one memo. If necessary, it can be further refined – but for now must be implemented.

[4] These statistics are based on a comprehensive analysis of FY2011 and 2012 I-924As and economic modeling used in the USCIS/ICF International EB-5 Program evaluation obtained by IIUSA via the Freedom of Information Act.