“How Reliable is That State TEA Certification Letter?” 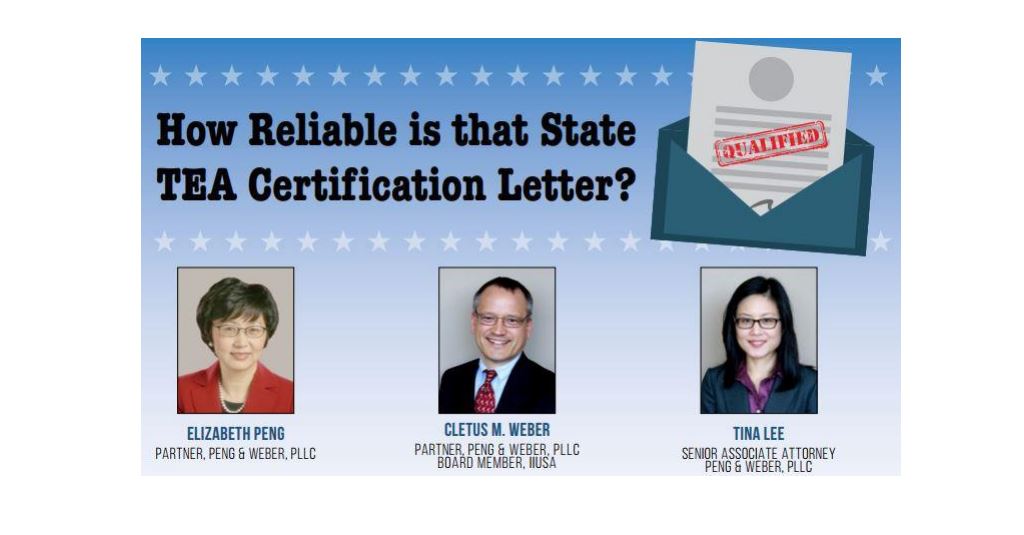 The current EB-5 statute and regulations set the minimum investment amount for EB-5 immigration at $1,000,000, which may be adjusted downward to $500,000 for a new commercial enterprise (“NCE”) or, commonly in the regional center context, a job creating entity (“JCE”), that is principally doing business in a targeted employment area (“TEA”). To demonstrate that the NCE in which an EB-5 investor has invested (or the JCE into which the capital is or will be deployed) is principally doing business in a TEA, the investor must submit with his or her I-526 petition evidence that the area, at the time of investment (or if the funds are in escrow and not yet released to the NCE, then at the time the I-526 petition is filed with USCIS), qualifies as a TEA – either as a “rural area” or a “high unemployment area” – as defined in the current EB-5 regulations. According to the USCIS Policy Manual published November 30, 2016 (and amended June 14, 2017), an NCE (or JCE) is “principally doing business” in the location where it regularly, systematically, and continuously provides goods or services that support job creation. This article focuses on the types of evidence that demonstrate a “high unemployment area” TEA, and the uncertainty of USCIS deference in certain situations to such evidence.

A high unemployment area is an area that has experienced unemployment of at least 150 percent of the national average rate. To evidence a high unemployment area, an investor may submit either of the following: (1) evidence that the Metropolitan Statistical Area (“MSA”) or county in which the investment was made has experienced an average unemployment rate of 150 percent of the national average rate as of the time of investment; or (2) where the county or MSA as a whole does not qualify, a letter from the authorized state governmental body of the relevant state designating a particular geographic or political subdivision (that is located outside a rural area) as a high unemployment area for EB-5 purposes. If an investor’s funds are held in escrow pending satisfaction of a particular condition (such as approval of the I-526 petition) and not yet transferred to the NCE, then under the USCIS Policy Manual, the “time of investment” for TEA analysis purposes is deemed to be the time of I-526 filing. The USCIS Policy Manual also makes clear that it will not grant deference to outdated TEA evidence which may have been relied upon by other EB-5 petitioners who invested earlier in the same NCE; the individual investor must establish that at the time of their individual investment or filing of the I-526 petition, the geographic area in question qualifies as a TEA.