IIUSA is pleased to issue the following report on last week’s EB-5 hearing in the Senate:

On Wednesday December 7, 2011, the Senate Committee on the Judiciary hosted a hearing titled: “Reauthorizing the EB-5 Regional Center Program: Promoting Job Creation and Economic Development in American Communities.”  Committee Chair, the Honorable Senator Patrick Leahy (D-VT), called the hearing based on his pending legislation that would permanently reauthorize the EB-5 Regional Center Program (“the Program”): Creating American Jobs Through Foreign Capital Investment Act (S. 642).  The House Judiciary Subcommittee on Immigration, Policy & Enforcement held a hearing in September on the reauthorization of the Program, which was soon followed by the introduction of H.R. 2972, the companion legislation to S. 642.

In addition to the vocal support from Chairman Leahy, the Chair of the Senate Judiciary Subcommittee on Immigration, the Honorable Senator Charles Schumer (D-NY), issued a statement praising the Program (Chairman Schumer is also cosponsor of S. 642):

The other Committee Members to attend and offer praise of the Program were:

Each delivered outstanding testimony (which are linked to below), telling the story of national economic impact that the Program now has to tell…all at no cost to the American taxpayer!  Our nation’s current economic and fiduciary state require policy solutions that can deliver economic impact at no cost to the public purse.  Combined that fact with the realities of globalization, which allow people, culture, and capital to cross national boundaries faster than ever before, and it is easy to see why the Program has enjoyed bipartisan support in the past and continues to today.

In addition to voicing general support for the Program, which he has worked to extend in the past, Committee Ranking Member Honorable Charles Grassley (R-IA) called a Program and all around immigration critic as a witness: David North, Fellow, Center for Immigration Studies (CIS).  IIUSA believes the testimonies of Mr. Divine and Mr. Stenger speak for themselves in terms of refuting Mr. North’s misguided assertions about the Program.

IIUSA appreciates the Senator’s duty to examine the Program in its entirety to identify areas for improved effectiveness and regulation.  Like any Program, there are areas for improvement.  Indeed, IIUSA (along with other stakeholders such as U.S. Citizenship and Immigration Services (“USCIS”) and American Immigration Lawyers Association (“AILA”)) have been working with Chairman Leahy on legislation to reform and modernize the Program.  USCIS also continues to work within its authority to improve the Program, with IIUSA providing comment along the way.  Some of our comments are directly related to these concerns, such as partnership with the Securities and Exchange Commission (“SEC”) and site visits under the existing USCIS Fraud Detection and National Security Directorate (“FDNS”) – both of which now occur.

Right now the Program needs to be made a permanent part of the America’s “21st Century Economic Development Toolbox.”  IIUSA is eager to work with Congress to improve the Program once that occurs.  The looming sunset date of September 30, 2012 is having an adverse effect on the marketplace already.  There are hundreds of thousands U.S. jobs and tens of billions of dollars of investment capital at stake.  Domestic entrepreneurs and foreign investors alike need to know the Program will be here for it to have maximum economic impact.

A cross-sector coalition voiced their support for permanent reauthorization of the Program.  These stakeholders know first hand how important attracting foreign direct investment is in a globalized world, and the job creating economic impact that results.

The growing list of those who submitted letters for the Congressional Record is as follows:

HEARING PHOTOS (more to be posted): 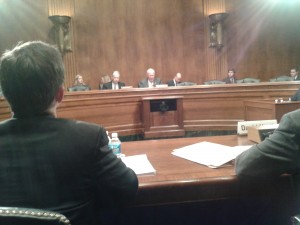 Senators Patrick Leahy (right) and Charles Grassley (left) begin the Senate Committee on the Judiciary hearing on the reauthorization of the EB-5 Regional Center Program.  Robert C. Divine (left with back towards camera) prepares for testimony.