Report on IIUSA’s May Trade Mission to Asia 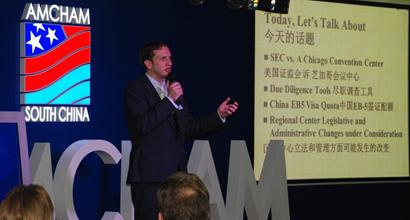 IIUSA recently returned from a successful trade mission to Asia with a mission to educate the investor markets in both China and Japan.  The goal of the trip was two-fold: (1) maintain the health and vitality of the EB-5 Regional Center Program’s (the “Program”) largest investor marketplace (i.e., China) through education and adovocacy; and, (2) promote the Program – in partnership with the U.S. Commercial Service (Dept of Commerce) – to a marketplace (Japan) that should be stronger in its EB-5 visa demand in order to diversify the investor marketplace.

In China, IIUSA visited with exit/entry associations in both Beijing and Guangzhou to discuss the latest EB-5 issues (including: due diligence, update on potential for Chinese EB-5 visa backlog, and legislative/policy changes under consideration) and to personally deliver the message that investors in the Chicago Convention Center whose funds had been frozen had already, or were in the process of, receiving their funds back.  This news was welcomed by IIUSA’s industry counterparts, who we also visited in February of this year to discuss the litigation process that follows a Securities & Exchange Commission (SEC) civil enforcement action.

In addition to meeting directly with exit/entry association officials, IIUSA hosted a seminar in each city (Beijing and Guangzhou) for migration agencies and any others interested in the EB-5 Program.  The Beijing seminar was hosted with assistance of the provincial exit/entry association at the International Club.  Speakers at the Beijing seminar included Peter D. Joseph, IIUSA Executive Director; Kelvin Ma, Chair, IIUSA International Committee; and, Lin Kang, Chairman, Beijing Exit/Entry Service Association.  IIUSA is deeply appreciative of the collaboration with the Beijing association to ensure the China EB-5 investor marketplace is as educated as possible to minimize the risk of subsequent market shocks like that caused by the SEC enforcement action against the Intercontinental Regional Center Trust of Chicago (NOT an IIUSA-member Regional Center).

The Guangzhou seminar was also hosted with assistance from the local provincial (Guangdong) Exit/Entry Service Association  – and in partnership with the American Chamber of Commerce in South China (AmCham South China) at the AmCham South China event facility.  Mr. Joseph and Mr. Ma were joined as speakers at this event by Harley Seyedin, President, AmCham South China, and Terry Tyminski, U.S. Commercial Service, U.S. Department of Commerce (from the U.S. Consulate in Guangzhou).  It was a true honor to be joined by the both of them to promote investment in the United States through the EB-5 Regional Center Program. 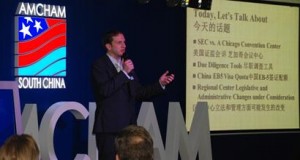 In Japan, IIUSA took part in a three-day, three-city (Tokyo, Nagoya, Osaka) road show – hosted by the U.S. Commercial Service – to promote investment in the U.S. by Japanese companies and individuals.  With Japan currently engaged in aggressive currency devaluation, the U.S. Commercial Service saw it as a good time to promote U.S. investment by those with healthy balance-sheets that will are becoming less valuable by the day due to the additional Japanese yen being released into circulation.  While EB-5 demand in Japan has limits, it should be producing more than 15-20 I-526 petitions than it has averaged annually the past several years.  IIUSA hopes to help diversify the EB-5 investor marketplace away from over-reliance on a couple of dominant markets so the industry is as insulated as possible from potential market shocks.

Joining IIUSA for portions of the trade mission were representatives of IIUSA’s leadership, including: K. David Andersson, IIUSA President; George W. Ekins, IIUSA Director; Daniel J. Healy, IIUSA Director; and, Bobby Schilling, IIUSA President’s Advisory Council.  IIUSA has been thoroughly engaged with overseas markets since Program re-authorization last September to do all we can to maintain the health of current EB-5 investor markets, while opening opportunity for members in underserved markets.

The culmination of this work in 2013 will be IIUSA’s partnership with AmCham South China to co-host the U.S. delegation to the China International Fair for Investment & Trade (CIFIT) – as detailed below.  We hope you will join us there!