While IIUSA is merely weeks away from releasing its FY2013 Economic Impact Report of the EB-5 Regional Center Program, we would like to whet your appetite with some updated figures on minimum foreign direct investment (FDI) contributed by the EB-5 Program. In the first quarter of fiscal year 2015 (FY2015), the EB-5 Program contributed at least $826 million to the U.S. economy, the highest quarterly output in the Program’s history! 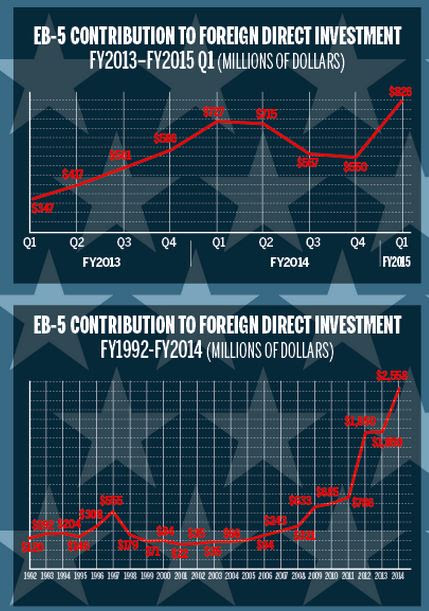 The minimum foreign direct investment figure is calculated by multiplying the number of approved I-526 petitions (according to data provided by U.S. Citizenship and Immigration Services) by the minimum EB-5 investment amount ($500,000). In Q1 2015, there were a total of 1,652 approvals, a growth of 50% from Q42014. To view the complete I-526 data report, click here.
Looking at EB-5 contributions of FDI year-over-year, FY2014 proved to be a high-water mark for the industry. In total, 5,115 I-526 petitions were approved which represents over 2.5 billion dollars in FDI.