For EB-5 project sponsors, the step of determining whether a project is located in a targeted employment area (TEA) can be critical. Unfortunately it can also be frustrating. While the federal regulations that broadly define a TEA do apply nationally, states administer the certification process, and their individual policies vary significantly, causing some obvious confusion. Some states take a very open, flexible stance and will provide the data they use and outline their official policy on the designating authority’s website, while other states offer more of a black box procedure where the project sponsor provides an address and the state responds with a simple Yes or No. This article describes the policies of three different states to illustrate how different the TEA pro-cess can be depending on the project location.

California has one of the most transparent TEA policies in the country. The State of California designated the Governor’s Office of Business and Economic Development (GO-Biz) to certify targeted employment areas in the state. GO-Biz implemented a reasonably flexible policy and publishes the census tract level unemployment estimates on its website, along with other helpful information to allow stakeholders to evaluate project sites on their own prior to making an official request. For targeted employment area certifications made at the census tract level, California will certify an individual high unemployment tract. Additionally, California will certify a combination of census tracts as long as there are no more than 12 census tracts and the combined multiple-tract area meets or exceeds the 150% of the national unemployment threshold. The state’s policy includes no other requirements or restrictions related to the shape of the resulting contiguous area. California dubs this process a “Special TEA.” 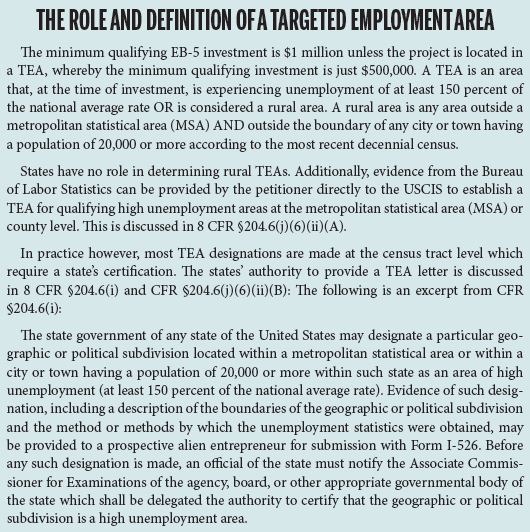 The state’s Special TEA policy requires a letter of support from the local Economic Development Corporation (EDC) or County or City in which the project is to be located. The letter must indicate the local EDC’s concurrence that the proposed area will reasonably be a source of workforce for the project. Generally, obtaining this local support letter is a straightforward process, as most California EDCs are familiar with the EB-5 program and Go-Biz’s requirements. However, if a local EDC has never received a request to provide a local support letter, it can be a more time consuming process to get them comfortable.

Recently, Go-Biz published an online web application where TEA certification requests can be generated based on an address. The useful tool shortcuts several steps in the typical process by (1) identifying the precise census tract for the address, (2) presenting the local area unemployment statistics, (3) determining if the single census tract qualifies as a high unemployment area, (4) allowing the user to create a multiple-tract targeted employment area, all while keeping track of the combined area unemployment rate, and (5) generating the official TEA request based on the inputs. California’s investment in the TEA web tool is evidence of the popularity of the EB-5 program, the volume of TEA requests in the state, and its commitment to serve EB-5 stakeholders.

While the new Go-Biz tool makes analyzing a project site for TEA-eligibility easier, it does have some drawbacks. The tool will only accept exact addresses, although this information is often not known at the time when TEA-eligibility needs to be determined. Also, as with all “address finders”, it does not always find a match or identify the correct census tract. Due to the uniqueness of each request, there will likely be other pitfalls as Go-Biz tries to make the TEA process as automated as possible.

New York: No Fuss, No Muss, No Telling

New York is one of the easiest states in which to make a TEA certification request. Whereas some states require a detailed TEA analysis to be provided to them, the New York Department of Labor (DOL) only requires the project location (specific address, cross-streets, etc.). Upon receiving the location information, the DOL analyzes the site independently and informs the requestor if the location qualifies or not. In our experience, the state will evaluate subarea unemployment data at both the census tract level and census block group level. Additionally, the state will certify combined multiple-subarea TEAs. Although the DOL does the heavy lifting in evaluating and creating TEAs, it is our experience that the state does not have any significant restrictions with regard to the shape of the resulting TEA or the number of tracts or block groups. The process does not require a support letter from a local economic development corporation or local government as is the case in California.

While New York is easy to work with on an administrative level, they are one of the few states that are still utilizing 2000 census data to develop the share ratios as part of the census-share calculation. Almost all states utilize more recent American Community Survey (ACS) data to develop the share ratios. It is not exactly clear when or if New York will switch from the 2000 census data to the more recent ACS data. However, if they do make this switch, the change in unemployment rate calculations at the census tract level could potentially be drastic. For further information on how this data change can affect census tract calculations and the census-share methodology, see P. Scheuren, “Targeted Employment Area Data Changes”, Regional Center Business Journal (June 2014).

On balance, Texas can be one of the most frustrating states in which to obtain a TEA certification. On the plus side, there is seeming flexibility: Governor Rick Perry issued a memo delegating the authority to designate TEAs to city mayors or county judges. Also, because there is no official statewide data set that is recognized or required by the individual cities and counties, all acceptable data sets can be evaluated to establish the TEA and analysts can investigate subarea unemployment data at both the census tract level and census block group level.  This task is facilitated for many larger cities in Texas which have defined certain acceptable data sets or procedures.  While this flexibility seems useful, there are several major considerations on the negative side of TEA practice in Texas.

As a consequence of having no specific data set that is required, project sponsors typically need to rely on an experienced economist to evaluate local area unemployment.  Also, despite the seeming flexibility gained in delegating the authority to local governments in Texas, cities and counties are often concerned about the legal implications of providing such a designation—and possibly the political implications of providing a letter that advertises their community has high unemployment.  In our experience, cities and counties appear uneasy with the EB-5 program in general. Furthermore, in some instances it is clear the city or county wishes to be the gatekeeper of which projects receive TEA designation irrespective of the data or a standard policy.  Still other Texas TEA designations are derailed by jurisdictional concerns. Cities and counties are often reluctant to provide TEA letters if the combined TEA crosses city or county boundaries. All of these considerations, falling outside the scope of inquiry focused on unemployment data calculated in accordance with the federal regulations, should not be an issue for TEA analysis.  But unfortunately that does not appear to always be the case in Texas (See Table 1).