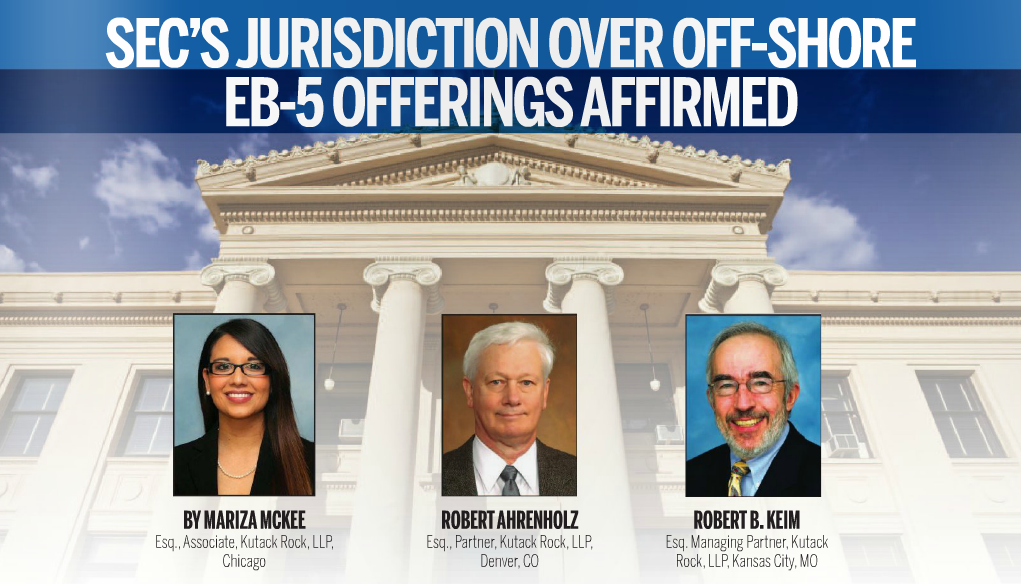 In an action brought by the Securities and Exchange Commission (“SEC”) involving allegations of fraudulent representations and omissions in offering materials under the federal securities laws against participants in an EB-5 offering, the United States District Court for the Northern District of Illinois, United States Securities and Exchange Commission v. Chicago Convention Center, et al. (Aug. 6, 2013) ruled that the SEC had jurisdiction to bring such action without otherwise deciding the merits of the case or whether the offering complied with Regulation S. The case has brought national attention to the EB-5 industry and involves allegations of a large scale fraudulent investment scheme perpetrated through material misstatements about the investment and use of proceeds in the offering documents and USCIS filings.

The Court determined that the SEC had jurisdiction even though the securities were only offered and sold off-shore to non-U.S. persons pursuant to Regulation S and were sold through foreign placement consultants who were not registered U.S. broker-dealers. The question presented was whether the SEC failed to meet, for jurisdictional purposes, the “transactional” test for jurisdiction set forth by the U.S. Supreme Court in Morrison v. National Australia Bank Ltd., 130 S. Ct. 2869, 177 L. Ed. 2d 535 (2010) (“Morrison”), as argued by the defendants or whether, as argued by the SEC, Section 929P(b) of Dodd-Frank controlled, which uses a “conduct” test and an “effects” test. This jurisdictional issue was important because, if the SEC’s complaint failed to properly allege violations under the federal securities acts, the defendants’ motion to dismiss the SEC action would be granted resulting in a potentially negative precedent for the SEC in future enforcement actions involving off-shore EB-5 offerings.

The Court found that under either theory of jurisdiction, viewing the facts of the allegation most favorable to the SEC, the SEC sufficiently alleged both a “domestic transaction” under Morrison and also the conduct and effects required by Section 929P(b), and allowed the case to proceed. The Court determined that a domestic transaction was properly alleged because: (i) subscription agreements were to be sent to defendants in the U.S., (ii) funds were wired to a U.S. based escrow agent, (iii) funds were released by the escrow agent only after approval of the investors’ U.S. visa applications, and (iv) the subscription agreements were accepted by the issuer in the U.S. Likewise, the Court determined that the conduct and effects tests were met because the conduct took place in the U.S. and the effect on the conduct was to assist investors in gaining U.S. residency and the creation of U.S. jobs. These are activities that are usually present in all properly structured EB-5 offerings and the Court gave no indication whether any one factor was more important than the others. In the future, it may be expected that any SEC enforcement action would allege additional factors to ensure jurisdiction, such as the fact that the project being financed was in the U.S., that the borrower was a U.S. entity, and the existence of any affiliation between the issuer and the borrower that may dictate the existence of the U.S. borrower as a co-issuer.

Is it possible to structure an EB-5 offering that would not give jurisdiction to the SEC? Given the myriad of facts existing in EB-5 offerings that exhibit a domestic transaction, that result appears extremely unlikely. As a result, the take-away from this case for regional centers, issuers and other EB-5 transaction participants is that the SEC and foreign plaintiffs have jurisdiction in U.S. courts over EB-5 offerings being offered off-shore to bring enforcement actions, if warranted, under the Securities Act of 1933 and the Securities Exchange Act of 1934. In light of the SEC’s public statements regarding its concern that EB-5 offerings comply with relevant U.S. securities laws, EB 5 participants should continue to carefully consider their due diligence and disclosure obligations and focus on regulatory compliance issues in future offerings. Going forward, it may not be surprising to see the SEC also target so-called “gatekeepers” (e.g. attorneys and other professionals) in EB-5 offerings for not fulfilling their due diligence and disclosure obligations.