This Friday, July 11th, IIUSA will be releasing its latest issue of the Regional Center Business Journal right here at iiusa.org. The forthcoming edition of The RCBJ includes a full recap of the May 7-9 EB-5 Advocacy Conference, articles on I-829 petition and RC approval trends, combining EB-5 capital with other economic development tools, newly enacted self-regulatory procedures for the industry, IIUSA’s international bridge building efforts, and much more. Be sure to check you mailboxes next week for the hard copy edition.

Over the past several weeks, we have highlighted outstanding articles in prior RCBJ issues and today we take a look at the September 2013 official press release from the CIFIT, IIUSA’s annual trade mission to China (Page 20). Be a part of the largest and most successful U.S. delegation in CIFIT history in 2014!  Become an Exhibitor or Sponsor Today! EARLY BIRD RATES FOR CIFIT 2014 (SEPT. 6-10) END JULY 15TH! REGISTER HERE. 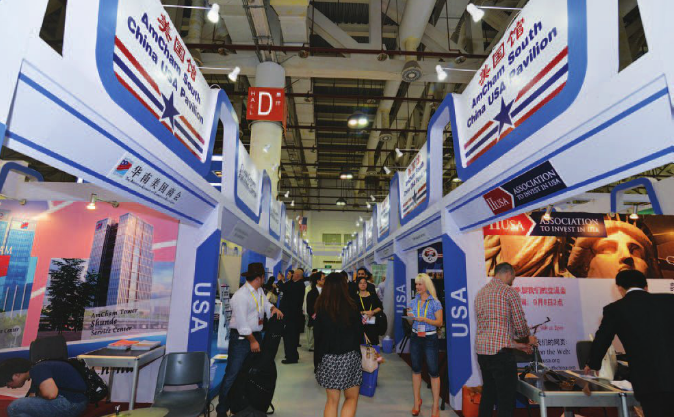 Mr. Harley Seyedin, president of The American Chamber of Commerce in South China (Am-Cham South China), this morning joined Mr. Yuan Rongxiang, Director of Propaganda Department of Fujian Province, Mr. Zhong Xingguo, Deputy Party Secretary of Xiamen, Mr. Wang Qiongwen, Director of Conference and Exhibition Bureau of Xiamen; Peter Joseph, the Executive Director of the Association to Invest in the U.S.A. (IIUSA) and senior representatives of the U.S. Consulate General in Guangzhou for the ribbon-cutting ceremony of the “AmCham South China USA Pavilion” at the China International Fair for Investment and Trade (CIFIT).

Taking place at 9:40 in the morning in Hall D of the Xiamen International Conference and Exhibition Center, the event kicked off what is expected to be the busiest year yet for the Pavilion’s exhibitors. This is the fifth consecutive year that CIFIT has included a U.S. Pavilion since Mr. Seyedin and former Consul General Robert Goldberg of the U.S. Consulate General in Guangzhou conceived and led the Pavilion’s inaugural effort in 2008.

Expected to be the largest of any at the 17th CIFIT, the 700-square-meter USA Pavilion is this year guiding individuals to investment opportunities in addition to its historical focus on larger commercial and industrial partnerships. In addition to establishing dialogue with potential investors for projects in the United States at the USA Pavilion, the 300 American companies of AmCham South China’s delegation will be participating in a variety of other activities at the fair. These include the “U.S.-China Enterprises Investment Cooperation Forum on Energy and Green Innovation”, meetings with senior officials from Fujian, Sichuan, Hebei and Chongqing and the chamber’s highly-regarded CIFIT Cocktail, this year scheduled for the evening of September 8 at the Westin Xiamen. This year marks the 11th consecutive delegation to CIFIT led by the chamber of commerce.

ABOUT THE AMERICAN CHAMBER OF COMMERCE IN SOUTH CHINA
The American Chamber of Commerce in South China (AmCham South China) is a non-partisan, non-profit organization dedicated to facilitating bilateral trade between the United States and the People’s Republic of China. Certified in 1995 by its parent organization, the U.S. Chamber of Commerce in Washington, D.C., AmCham South China represents more than 2,000 corporate and individual members, is governed by a fully-independent Board of Governors elected from its membership, and provides dynamic, on-the-ground support for American and International companies doing business in South China. In 2012, AmCham South China hosted nearly 10,000 business executives, government leaders and journalists from around the world at its briefings, seminars, committee meetings and social gatherings.