RCBJ Perspectives: “Investment Migration and the State of Play in Europe” 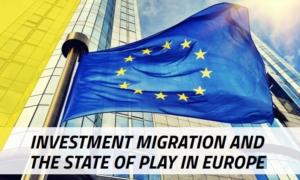 Investment migration refers to the attainment of citizenship or residential rights in return for a financial investment or other contributions to the host country. Today, investment migration is a global industry and is featured in immigration law in most UN recognized countries, albeit in different forms and shapes. Indeed, while there are currently 12 citizenship by investment (CBI) programs stricto sensu, many countries offer facilitated naturalization paths that allow for acquisition of citizenship under lessened requirements. Facilitated naturalization is often allowedon grounds of “special achievements” of applicants or “special interest” of states. Residence by investment (RBI) programs have similar paths to residency: while some RBI programs are specifically designed to attract foreign investors in return for residential rights, many countries with no investment programs issue business visas, international talent visas, and/or other economic residence options.

The number of investment programs in Europe (specifically in EU Member States) has, naturally, triggered the interest of EU policymakers. The freedom of movement enjoyed by EU citizens means that citizens of any EU Member State can settle in any other Member State as well as in Switzerland, Iceland, and Norway. Thus, a Cypriot or Maltese citizen who has obtained his citizenship through an extraordinary investment, can freely relocate to Germany and enjoy most rights domestic citizens do, including the right to stay, establish, or work there. Therefore, the EU has a legitimate interest in following developments related to the acquisition and loss of citizenship in EU member States.

EU institutions have a lot of criticism about these programs and initiate a lot of discussions (and potential legislation) to address them, but this criticism and activity is one sided. The IMC works to balance the discussions and is encouraging other groups to work with them to do the same. In doing so, the integrity of the programs will be strengthened all around…