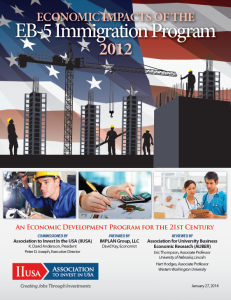 A new economic impact study finds that the U.S. EB-5 immigrant investor visa program contributed $3.39 billion to U.S. GDP and supported over 42,000 U.S. jobs during fiscal year 2012. This is more than a 2-fold increase from the average annual impact result reported in 2011.

Congress created the EB-5 program in 1990 to benefit the U.S. economy by attracting investments from qualified foreign investors.  Under the program, each investor is required to demonstrate that at least 10 new jobs were created or saved as a result of the EB-5 investment, which must be a minimum of $1 million, or $500,000 if the funds are invested in certain high-unemployment or rural areas.

“As the industry trade association for the EB-5 Regional Center Program, IIUSA is committed to accurately measuring the positive impacts of the EB-5 Program in terms of job creation, GDP growth, and tax revenue,” said IIUSA Executive Director Peter Joseph. “The results of the 2012 assessment unequivocally demonstrate that the EB-5 Program is delivering on its promise of regional economic development and U.S. job creation at no cost to the taxpayer.”

The report uses a comprehensive dataset on EB-5 investor applications and EB-5 Regional Center investments along with well-established economic modelling methods to determine overall positive impacts on GDP and job growth  as well as federal, state, and local tax revenue from EB-5 investments in U.S. economic development projects, household spending by immigrant investors and other EB-5 related spending.  Economic benefits are measured by state and by impacted industry sector.

Key findings of the report include:

The study, which was conducted by David Kay of IMPLAN Group, LLC and peer-reviewed by Professors Eric Thompson and Hart Hodges of Association for University Business Economic Research (AUBER), was commissioned by the Association to Invest in the USA (IIUSA), the national trade association representing EB-5 Regional Centers that account for 95 percent of the capital flowing through the EB-5 program.

This is the second comprehensive economic impact report commissioned by IIUSA based on comprehensive data-sets of I-526 and I-829 approval/denial statistics for each Regional Center in the country for fiscal years 2010-2012, obtained through a vigorous process of data collection and subsequent analysis of I-924A filings.  A breakdown of the “new commercial enterprises” and “job creating enterprises” that Regional Centers fund throughout the year, along with North American Industry Classification System (NAICS) codes to track industry sector impacts adds further context to the data. 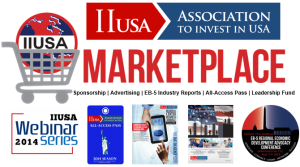 The Economic Impacts of the EB-5 Program in 2012 Report is now available for $99. Members earn 50% off using the promo code at checkout. Visit the IIUSA Marketplace to purchase today.