“Of Kids and Cowboys: SEC Enforcement Outside EB-5 Parallels Inside EB-5” 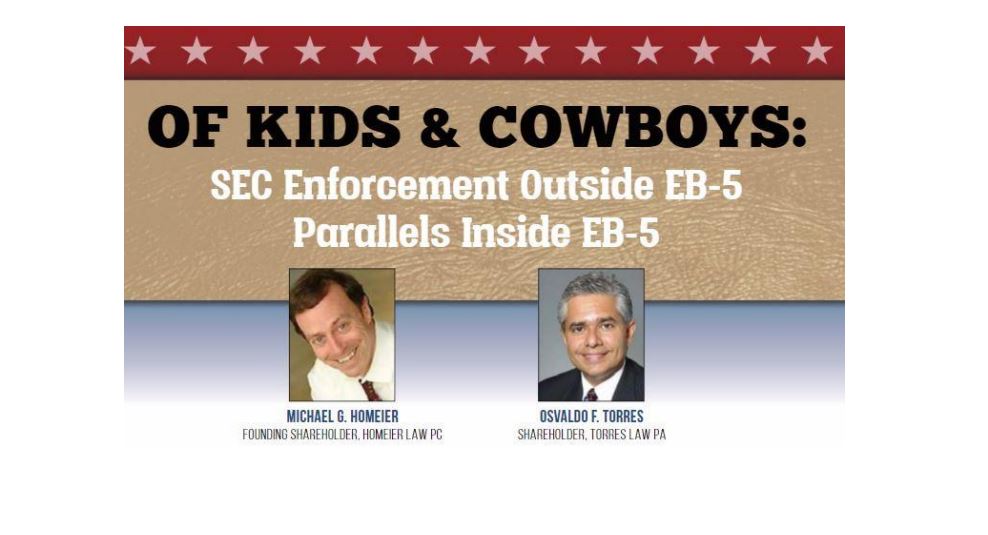 What do the following securities enforcement actions have in common?

1. SEC Obtains Asset Freeze and Appointment of Receiver in Fraudulent Real Estate Investment Scheme – A U.S. district judge entered an asset freeze and appointed a receiver over a company that the Securities and Exchange Commission (“SEC”) brought charges against for defrauding 50 investors in a commercial real estate investment scheme using false statements on the company’s website and in its written offering materials as to amount of return, use of escrow, and that investments were “bonded.”

2. SEC: Oil and Gas Promoter Misappropriated Investor Funds – The SEC complaint charged a promoter with recycling offering documents from prior (failed) projects, falsely addressing commingling of funds, and falsely claiming government licensure allowing the promoter to misappropriate most of the funds raised from investors on a project to rework and recomplete an oil and gas well, spending those funds on personal expenses, including $236,000 for gambling charges and cash withdrawals and $240,000 on house and car payments, vacations, dining and shopping, and jewelry.

3. FINRA Charges Broker Over Misleading Offering Docs – FINRA brought a complaint alleging that a California broker obtained $1.6 million from 23 of his retail customers for interests in a pooled investment fund that he both created and controlled through a false and misleading PPM, which misrepresented and failed to disclose material information to investors about potential fees, costs and risks associated with the fund, including those relating to the individual controlling their capital, who was engaging in bank fraud and fraudulent trading in another unrelated pooled investment program at the same time, enabling the unrecoverable transfer of $650,000 to a third-party financier.

Answer: Not one of them involves an EB-5 project.

They may sound like the high-profile EB-5 securities cases that have attracted considerable attention, but not one of them has anything to do with EB-5. Instead, they are “garden variety” securities law enforcement actions of the sort witnessed across the over 80 years of the SEC’s existence, yet collected just from the month of April 2017. There are many more from April—and, of course, thousands upon thousands during those over 80 years.