Work is underway by IMPLAN Group towards developing the 2012 economic impact report of the EB-5 industry. Based on comprehensive EB-5 investment records, this past year IIUSA published a peer-reviewed economic impact study for the EB-5 Program for the years 2010-2011, and we are currently producing the same analysis based off of 2012 data. Considering the findings which resulted from the 2010-2011 analysis, we are anxiously anticipating the results of this upcoming economic report. The compelling 2010-2011 results show that the Program supported tens of thousands American jobs, contributed billions of dollars to U.S. GDP, and hundreds of millions of federal/state/local tax revenue in those years alone. Program utilization has more than doubled in the years that have followed – with demand at an all-time high in the current fiscal year (2013). 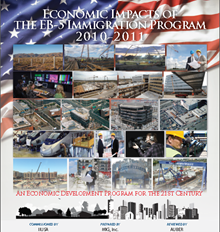