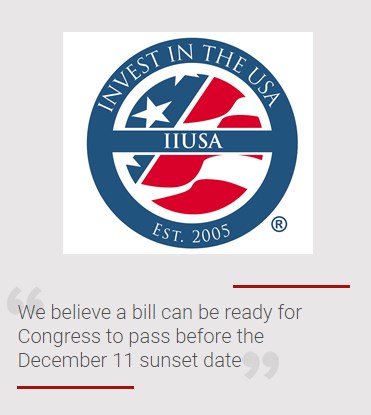 Under EB-5, a program created by Congress with broad bipartisan support, foreign nationals who invest at least $500,000 or $1,000,000 in approved U.S. businesses are eligible for permanent residency if the U.S. government confirms that their investment created at least 10 American jobs within two years of the investment.

“We greatly appreciate the leadership and hard work of Members of Congress to develop legislation to reauthorize and strengthen the EB-5 Regional Center Program,” said Peter D. Joseph, IIUSA Executive Director. “The EB-5 Program is an increasingly important tool for economic development and job creation across the nation. The latest draft bill is a significant improvement, and with the revisions outlined in our letter, we believe a bill can be ready for Congress to pass before the December 11 sunset date.”

IIUSA makes its recommendations after close and careful review of draft legislative language and consultation with its members who represent big and small projects, urban and rural areas and industry sectors ranging from real estate, manufacturing and energy to infrastructure and economic development. The comments build on a reauthorization and reform compromise proposal that IIUSA submitted to the Judiciary Committee leaders on November 2.

IIUSA’s latest comments and recommendations address a number of important issues including:

In addition to these core four issues, IIUSA provided detailed technical comments to other reform provisions included in the draft legislation.

“We strongly believe that these recommendations provide a path to long term reform and reauthorization with no lapse in the Program,” commented Joseph. “This outcome will allow the EB-5 Program to maintain – and grow – its positive impact. In fact, the Program will be even stronger thanks to a number of important improvements to Program integrity and effectiveness.”