IIUSA Representing the EB-5 Industry at Events Across the Country

The last few months have been busy for IIUSA staff as they traveled the world promoting the EB-5 Program, sharing industry best practices and building policy consensus and the coming months promise to be just as important as IIUSA looks to continue to build consensus across the industry.

Earlier this month IIUSA Executive Director Peter D. Joseph presented at 2016 New York EB-5 & Investment Immigration Conference. Also this month, IIUSA staff will advocate for a permanent policy platform in support of the EB-5 Program at the National Association of Counties (NACo) annual conference in Los Angeles. The National Conference of State Legislatures (NCSL) will also consider a resolution in support of the Program at their annual meeting in Chicago in August.

Ahead of the September 30 “sunset” date for the EB-5 Program, IIUSA is delivering a message of self-regulation and consensus building to the industry and outside stakeholders and these events offered the perfect platform to do so. IIUSA will continue to seek consensus amongst its members and to engage in constructive policy discussions with other stakeholders and lawmakers to secure a future for the Program. 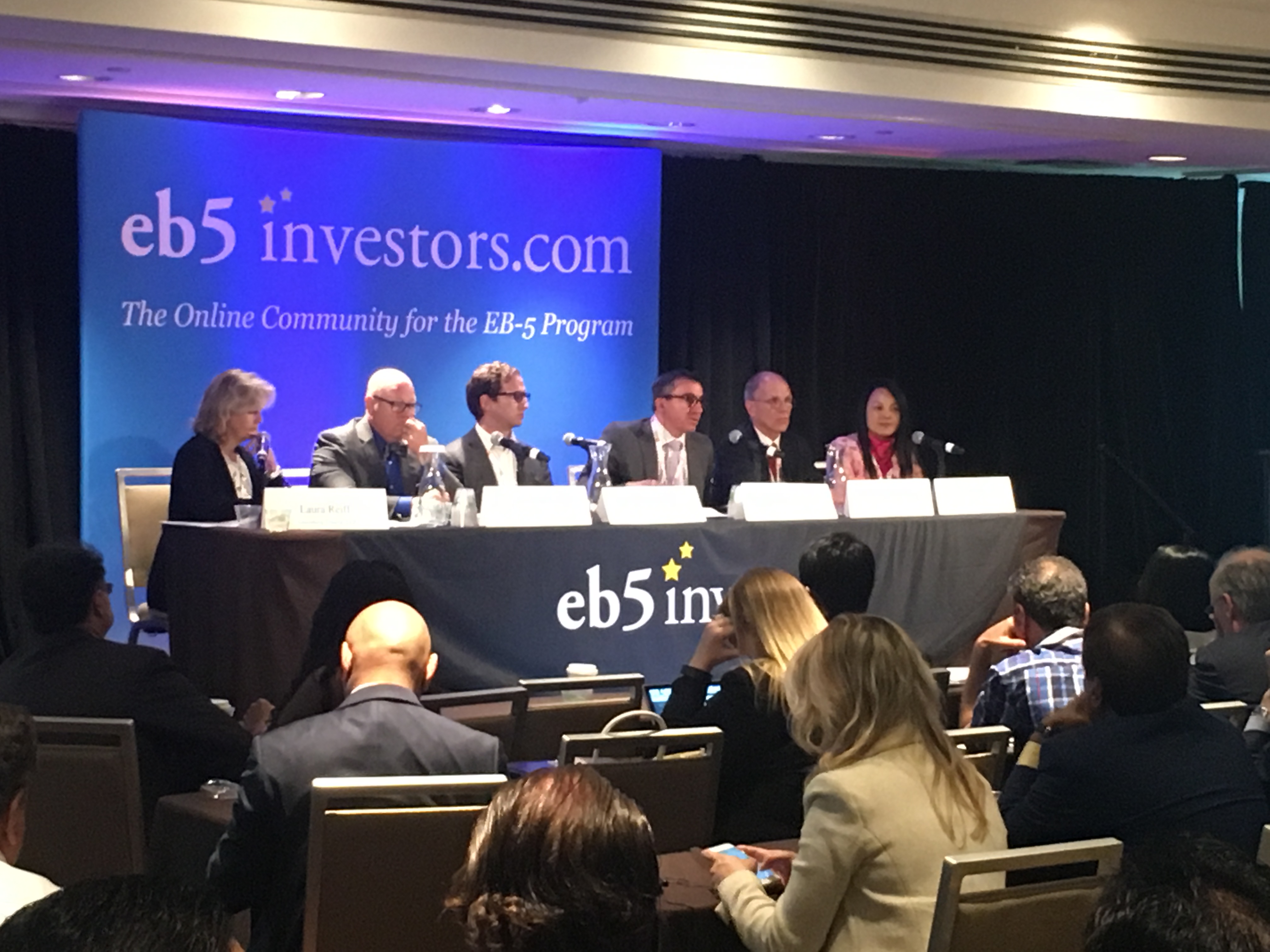 On July 17-18, EB5 Investors Magazine hosted the 2016 New York EB-5 & Investment Immigration Conference. The event brought industry professionals from around the world together to discuss the latest trends in the EB-5 world and the current state of EB-5 legislation and reauthorization. The event featured two days of networking and exhibiting and IIUSA staff was proud to represent the EB-5 Industry as your trade association at the event.

IIUSA Executive Director Peter D. Joseph spoke on a panel The Future of EB-5 providing updates on EB-5 reform and reauthorization. Mr. Joseph was joined by IIUSA members Laura Reiff (Greenberg Traurig, LLP) Dan Healy (Civitas Capital Group) Linda He (Wailian Overseas Consulting Group) Jeff Campion (Pathways EB-5) and Stephen Yale-Loehr (Miller Mayer LLP). The panel represented the many diverse industry voices that are important in the ongoing legislative process. In addition to presenting their outlook on the future of the EB-5 Program, the panelists also discussed a joint industry letter that was sent to congress on July 5, 2016. The letter, signed by IIUSA, the U.S. Chamber of Commerce, EB-5 Investment Coalition, Real Estate Roundtable and American Immigration Lawyers Association (AILA), expressed support for extending the Program and recommending reforms to enhance program integrity and effectiveness as an economic development tool. This letter is an important signifier that the various EB-5 Stakeholders with a broad range of interests and priorities are able to reach a consensus to ensure that the EB-5 Program is reauthorized.

In addition to speaking on a panel, Mr. Joseph also had the distinct pleasure of intruding Congressman Hakeem Jeffries (D-NY). Congressman Jefferies is a strong proponent of the EB-5 Program and is a valuable voice of support on the House Judiciary Committee. Mr. Jeffries spoke eloquently about the positive impact of the EB-5 Program in his district and more broadly about the impact of EB-5 throughout the country for U.S. economic development…Learn More

From July 22-25 the National Association of Counties (NACo) will host its 81st Annual Conference and Exposition in Long Beach, California. The event will bring together experts from the private and nonprofit sectors and other leaders from across the country to discuss the pressing challenges that are being experienced throughout the country and to present opinions on potential solutions.

At the 80th Annual conference last year, in Charlotte, NC,NACo considered and adopted a policy resolution in support of the EB-5 Regional Center Program as a vital tool for economic development. The integral development that EB-5 provides to counties across the country is evident and reflected in the public pronouncement of support by NACo and its members.
This year, NACo will consider a permanent policy platform in support of EB-5 and IIUSA Executive Director Peter D. Joseph will be in attendance to ensure its adoption, reflecting the important work that the EB-5 Program is doing in counties throughout the country…Learn More.

On Thursday July 28th, from 1:00 to 2:30pm (Eastern) United States Citizenship and Immigration Services (USCIS) will host an in person stakeholder engagement in Miami, FL. The engagement is part of USCIS’s ongoing efforts to enhance dialogue with EB-5 stakeholders. During the first part of this engagement, USCIS officials will provide EB-5 program updates. The second part will be a question-and-answer session. We invite you to ask non-case specific questions or provide feedback on the EB-5 program.

The call will also likely touch on the topic on potential EB-5 Regulations that Department of Homeland Security (DHS) Secretary Jeh Johnson mentioned during a Senate Judiciary Oversight Committee hearing on June 30th. Late in that hearing Secretary Johnson and Senate Judiciary Committee chair, Charles Grassley (R-IA), had a brief – but important – exchange on the status of regulatory reform of the EB-5 Program (something that the Secretary has been publicly committed to doing since early last year when he sent a letter detailing such plans to the Senate Judiciary Committee leadership (click here to view the letter). According to the Secretary’s comments, USCIS intends to publish proposed new EB-5 regulations in November 2016 for public comments before promulgating and implementing new rules…Learn More

From August 8-11 the National Conference of State Legislators (NCSL) will host its annual conference in Chicago, IL. The conference is the largest gathering of state legislators and staff in the country. The event will feature two days of networking and important opportunities to exchange ideas and learn from expert panels on the potential solutions to the nation’s most pressing issues.

This year, IIUSA Associate Director of Advocacy, Ashely Sanislo Casey, will attend to present NCSL with a resolution in support of the EB-5 Program. The resolution, which is sponsored by Rep. Brent Yonts (D-KY), aims to formalize the National Conference of State Legislatures support of the EB-5 Program and to appreciate the important economic development the EB-5 industry is promoting throughout the country.

In 2015, the California State Assembly’s Committee on Jobs, Economic Development, and the Economy sent a letter expressing its support for reauthorization of the EB-5 Program to members of the California delegation. Building off of that success, IIUSA is confident NCSL will adopt this resolution.…Learn More