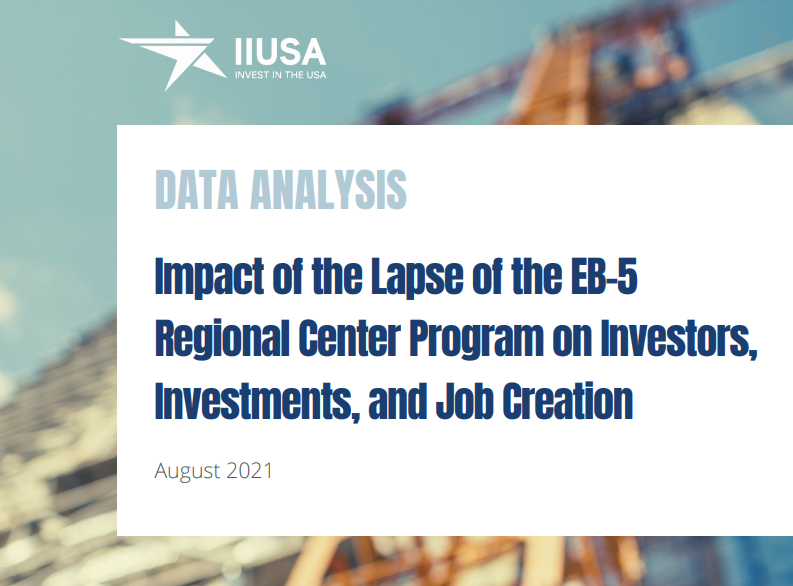 The EB-5 Regional Center Program (the Program) was created as a pilot program by the Congress in 1992 to stimulate local economic growth via foreign direct investment. Since its inception, the Program has served as a catalyst to the U.S. economy, saving and creating hundreds of thousands of American jobs and delivering tens of billions of capital investment for American businesses. While the Program has been experiencing short-term reauthorizations since 2015, it has expired since July 1, 2021 because Congress failed to pass a legislation to extend the Program beyond its last sunset date.

Not only is the current lapse in statutory authorization of the Program preventing regional centers from generating new foreign direct investment to aid in the nation’s economic recovery, it’s also putting EB-5 investments already in place and committed to job-creating projects at stake. With their legal immigration process put on hold indefinitely due to the lapse of the Program, immigrant investors who have already invested in the U.S. through an approved regional center could withdraw their EB-5 application and capital investment, potentially leading to tens of thousands of lawsuits and putting economic funding and job creation at risk.

Our analysis shows that the current lapse has affected nearly 32,600 committed immigrant investors with an I-526 petition on file, putting at least $15 billion in capital investment and over 486,900 American jobs in jeopardy (see Table 1).

Under the current lapse in authorization of the Program, United States Citizenship and Immigration Services (USCIS) has halted their adjudication of all I-526 petitions filed by EB-5 investors affiliated with regional centers. According to USCIS, nearly 12,800 EB-5 investors had a pending I-526 petition as of June 30 when the Program expired. Historically, according to the Department of State, 93.4% of the EB-5 visa numbers have been used by applicants who invested through a regional center. That is, nearly 12,000 EB-5 investors with an I-526 petition on file will not receive any adjudication on their EB-5 cases during the lapse of the Program and experience delays in their legal immigration process (see Table 2).

In addition, the July, August, and September Visa Bulletins noted that EB-5 visa numbers are “unauthorized” for issuance to all applicants who are associated with the Program (the “I5” and “R5” categories). As a result, visa applicants with an approved I-526 petition currently are not able to receive any EB-5 visa number after the Program’s expiration on June 30. Based on data from USCIS and Department of State, IIUSA estimates that more than 20,630 EB-5 investors whose I-526 petitions have been approved are not able to continue their legal immigration process due to the lapse of the Program (see Table 3).[1]

Overall, it’s our estimate that nearly 32,600 EB-5 investors who have invested in a job-creating project through an approved regional center are affected by the current lapse of the Program. These committed investors and their family members are facing an indefinite delay in their legal immigration process until the Program is reauthorized by Congress.

Each one of these EB-5 investors who are affected by the lapse of the Program has already committed at least $500,000 in capital investment to an economic development project in the U.S. By our estimates, approximately 300 of these investors have invested at least $900,000 through a regional center after the EB-5 regulatory reform raised the minimum investment amount between November 21, 2019 and June 22, 2021.

We estimate that nearly $4.9 billion in capital investment has been or is in the process of being injected into the U.S. economy through a regional center from EB-5 investors with a pending I-526 petition when the Program expired on June 30.[2] In addition, EB-5 investors whose I-526 petitions have been approved have already generated over $10.3 billion, funding a variety of job-creating projects through regional center across the country. Together, more than $15 billion in capital investment has been committed by the EB-5 investors who are affected by the current lapse of the Program (see Table 4). These investments are at stake if the Program is not reauthorized by Congress.

Furthermore, these EB-5 investments save and create jobs for American workers. In fact, the Department of Commerce concluded that each unit of EB-5 investment is expected to create 16 jobs when used in conjunction with other financing sources.[3] That is, nearly 487,000 American jobs would be generated by the EB-5 investment associated with the immigrant investors whose legal immigrant process is affected by the lapse of the Program. These jobs are now at stake.

Lastly, the vast majority of EB-5 projects are funded by a combination of EB-5 investment and other financing sources such as bank loans, developer equity, etc. In addition, EB-5 investors are required to pay taxes to the federal, state, and local governments on their worldwide income. The role of EB-5 investment in a project’s capital stack and the tax benefits from immigrant investors both indicate that the economic consequences associated with the lapse of the Program are well beyond the amount of EB-5 investment or the number of American jobs at stake, and potentially could amount to tens of billions of dollars. It is imperative for Program to be reauthorized by Congress in order to prevent this significant economic loss.

[1] Due to data scarcity, we have to rely on approximation to estimate the number of investors that fall into this category. Specifically, according to USCIS, 21,503 EB-5 applicants with an approved I-526 petition were awaiting visa availability due to the backlog. These investors are affected by the lapse and not able to receive any EB-5 visa numbers even though they are not used by other applicants. In addition, based on USCIS’ latest data on I-526 quarterly statistics, a total of 592 I-526 petitions were approved during Q3, FY2021. It’s unlikely that these investors with a newly I-526 approval were able to secure a conditional permanent residency before the Regional Center Program expired on June 30th given the current processing time for visa interviews.

[2] According to USCIS Office of Policy & Strategy, approximately 391 EB-5 investors filed I-526 petitions when the minimum investment amount was raised to $900,000 between December 2019 and May 2021. The estimated amount of EB-5 investment generated by EB-5 regional center investors with a pending I-526 petition is calculated based on the minimum investment amounts ($500k and $900k) and the 12-month average I-526 approval rate.

[3] U.S. Department of Commerce. 2017. Estimating the Investment and Job Creation Impact of the EB-5 Program.

← IMI: EB-5 is First and Foremost About U.S. Job Creation, Not Immigration IIUSA EB-5 Industry Forum is Committed to a Safe Gathering - Mask Requirement in Place →
0
0
Your Cart
Your cart is emptyReturn to Shop
Continue Shopping