IIUSA Member Perspective: “From the City to The Hill: EB-5 Dialogue with Congressman Hakeem Jeffries” 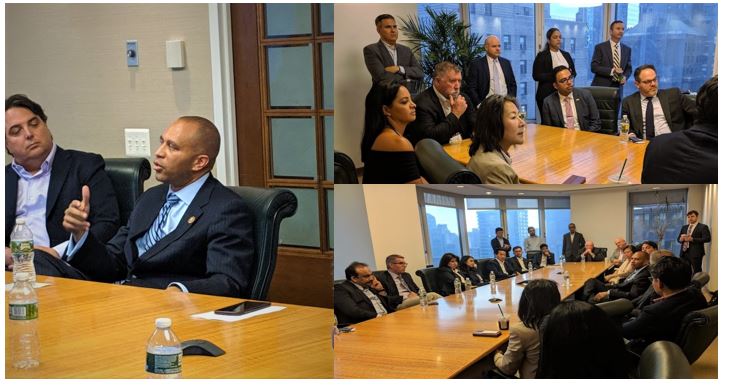 On an overcast Monday afternoon in a conference room sitting high atop New York City, EB-5 attorneys, developers and project managers sat around a large roundtable to discuss legislative issues surrounding the EB-5 program. Congressman Hakeem Jeffries represents the 8th District of New York, consisting of Brooklyn and a portion of Queens. An EB-5 proponent and important ally in the House of Representatives, Congressman Jeffries readily joined the discussion on behalf of both Congress and his constituents. An avid supporter of immigration reform in the past, Congressman Jeffries has previously collaborated with the New York Immigration Coalition and the Fair Immigration Reform Movement in his sustained efforts to bring comprehensive changes to the U.S. immigration system.

Congressman Jeffries opened the dialogue by emphasizing the extensive diversity of his constituents, a majority of whom are immigrants or children of immigrants, and the colloquial “American dream” that many of them share. This dream, Jeffries stated, “must be preserved” and included in the larger narrative of immigration policy.

Congressman Jeffries, who is very knowledgeable about EB-5, emphasized that it is vital that EB-5 stakeholders come together and support sustainable changes to a program that will bolster its effectivity and availability by engaging the bicameral legislature. Representatives and Senators alike have expressed support for the bill, and though the Regulations going into effect on November 21st are still a hurdle for some, it is imperative that we continue to support our allies in the promotion of the EB-5 program.

The Congressman articulated concerns many members of Congress feel surrounding EB-5 investments and job creation, including the need for program integrity reforms.