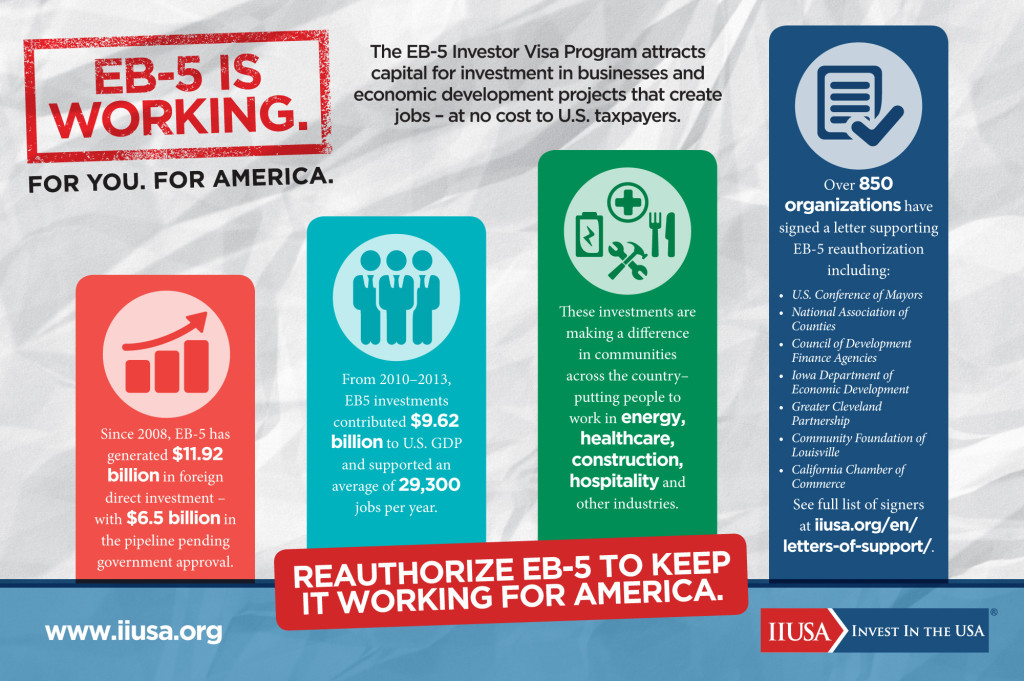 It is time for permanent authorization!

On October 6, 1992, Congress enhanced the economic impact of the EB-5 program by permitting the designation of Regional Centers to pool EB-5 capital from multiple foreign investors for investment in USCIS-approved economic development projects within a defined geographic region. A Regional Center is defined as “any economic entity, public or private, which is involved with the promotion of economic growth, improved regional productivity, job creation and increased domestic capital investment.” Today, over 95 percent of all EB-5 capital is raised and invested through Regional Centers (and over 95% of that capital is invested through IIUSA member Regional Centers)!

Regional Centers maximize the program’s job creation benefits by facilitating the investment of significant amounts of capital in large-scale projects – often in coordination with regional economic development agencies – which use the EB-5 funds to leverage additional capital. Regional Centers use economic analysis models, including those developed by the U.S. Department of Commerce, to demonstrate that job creation targets required by law have been achieved. For investments made through Regional Centers, at least 10 direct, indirect or induced jobs must be created.

Existing federally-designated Regional Centers include entities that are publicly owned and operated by state economic development agencies as well as public-private partnerships and private sector investment companies. A Regional Center obtains its designation by submitting a detailed application to USCIS. The application must state the kinds of businesses that will receive capital from investors, the jobs that will be created directly or indirectly as a result of the investment of capital, and the other positive economic impacts that will result from the investment of capital.

All securities offerings made by EB-5 Regional Centers are subject to U.S. securities laws, enforced by state securities regulators and the U.S. Securities & Exchange Commission. Proper oversight, transparency, compliance with – and enforcement of – all applicable securities, anti-fraud and immigration laws and regulations are essential to maintain the confidence of all industry stakeholders and ensure that the EB-5 Program continues to bring capital and job creation to American communities.

Nationwide, we know #EB5isWorking. The numbers speak for themselves. In Q3 of fiscal year (FY) 2015 alone, EB-5 contributed $1.4 billion of FDI to the U.S. economy (the first time eclipsing $1 billion in a single quarter) and by the end of the FY the total contribution will be over $4.3 billion. From 2008 to 2015, over $13 billion in EB-5 capital has been put to work in the U.S. to create American jobs – an increase in over 1,200%. Peer-reviewed economic impact studies for 2010-2013 also show that EB-5 contributed over $9.62 billion to U.S. gross domestic product and over $2 billion in federal/state/local tax revenue while supporting an average of 29,300 American jobs per year (over 41,000 in 2012 and 2013 alone, respectively). With over 95% of all EB-5 capital investment flowing through IIUSA Regional Center members, we are proud to represent an industry that creating American jobs with the opportunities that come with globalization.

Between now and December 11, Congress should – alongside reforms that enhance program integrity by deterring fraud and protecting national security – permanently authorize the EB-5 Regional Center Program. It is quit simple “an idea whose time has come.”

CLICK HERE to show your support for the EB-5 Regional Center Program by joining almost 900 signatories from from across the United States and spanning the public, non-profit, and private sectors!