Today, the U.S. Department of Labor (DOL), Bureau of Labor Statistics (BLS), released unemployment statistics for January 2011.  The unemployment rate dropped 0.4% to 9.0%. This is good news, of course.  However, private sector hiring was lower than projected, and 9.0% remains far higher than “normal” unemployment levels.

Hilda Solis, Secretary, DOL, released a statement on the statistics stating that she is “encouraged by the drop in the unemployment rate and convinced that the actions taken by the administration have helped drive this recovery…”, while also acknowledging that “We know we have a ways to go.”

In addition, Ben Bernake, Chairman of the Federal Reserve, gave a speech at the National Press Club in Washington, DC yesterday.  He was quoted as saying it would likely take years for unemployment to fall to “normal levels” and that ““until we see a sustained period of stronger job creation, we cannot consider the recovery to be truly established.”

Unfortunately, it does not appear that the labor market bouncing back as quickly as the stock market.  Labor markets tend to be the last part of post-recession economic recovery – especially when catalyzed by a financial crisis the magnitude of the 2008 meltdown.  With banks still hesitant to make commercial loans, raising the capital necessary for new hiring has proven difficult for many U.S. businesses. 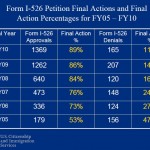 That means around $684,500,000 (1,369 x $500,000 minimum required investment thresholds for “Target Employment Areas (TEAs)” – i.e. high unemployment or rural, where most Regional Center investment opporunities are located) in foreign direct investment (FDI) was brought into the U.S. in one year.  Much of this “EB-5 FDI” is leveraged with domestic capital to get projects completed and U.S. jobs created.  The minimal job-creation impact of this FDI over the next few years, based on the Program’s 10 jobs per investor requirement, is 13,069 jobs created.  However, in terms of actual market standards, Regional Centers allocate many more than 10 jobs per investor, to avoid “close calls.”  That also does not measure the secondary economic impacts that comes with the immigrant investor’s purchasing of housing, paying taxes, sending children to U.S. school/universities, etc.

As I have said in previous posts, the federal government is in a tough spot balancing the need to support the economic recovery with the need to address the budget deficit.  Traditional Keynesian economic policies (i.e. stimulate demand with tax cuts or increased public expenditure) are not feasible in this environment.  While there is always an urge to turn inward at times of economic uncertainty, that is the opposite of what needs to be done.   The U.S. needs to open its doors to business and successful entrepreneurs from around the world.  It is the most potent tool available to address the economic issues because it both promotes economic growth and does not cost the government anything.

The EB-5 Regional Center Program is an important part of the equation for this kind of policy.  However, with the “sunset date” of September 30, 2012 looming in the not so distant future…the U.S. is sending a mixed message to potential immigrant investors all over the world.  They hear President Obama talk very highly about attracting business and “talent” to the U.S. but see a Program that has a past of short term extensions.  The 112th Congress has the opportunity to make U.S. policy reflect the President’s words of wisdom.  An easy, and politically prudent, start would be to permanently extend the Program – offering the same certainty to investors that they get with other immigrant investor programs around the world.