The U.S. Department of State – Bureau of Consular Affairs released its Visa Bulletin for the month of July (displayed below, view PDF). The bulletin reveals that for Mainland-China born EB-5 visa applicants, the cutoff date is now September 1, 2013, moving up from May 1, 2013 in the last two previous monthly bulletins.

This means that, as of July 1, 2015 Chinese investors who filed their I-526 petitions before September 1, 2013 can have interviews scheduled at the U.S. Consulate in Guangzhou and be issued conditional immigrant visas to enter the U.S. or, if in the U.S., can apply for adjustment of status. The reason for the four month advance of the cutoff date is that the level of EB-5 demand from other countries has been less than expected. This is important because lower worldwide demand means more applicants from China can be included in the 10,000 worldwide limit. The Department of State advises that the cutoff date may further advance in the last two months of the fiscal year ending September 30, 2015, with the best case scenario for Mainland-China EB-5 applicants being a November 2013 cut-off date. 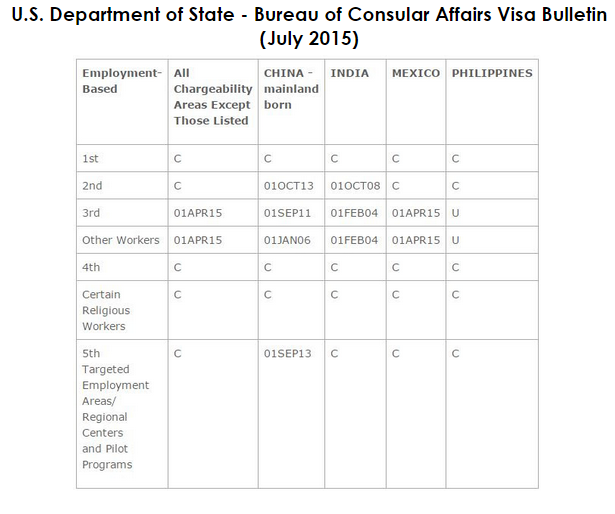 In April, IIUSA looked at the implications of a recent State Department “white paper” about the Child Status Protection Act (CSPA).

Importantly, the State Department has “made good” on its commitment to send out immigrant visa processing “fee bills” to investors whose I-526 petitions were approved up to April 30, 2013, even if the National Visa Center (NVC) did not get around to receiving the petition file from USCIS and processing the fee bill until after May 1, 2015 at a time when a visa number was not available because the priority date was after the initial cut-off date of May 1, 2013.  Investors receiving such fee bills have been thwarted from paying them electronically because of systems problems at NVC, but it appears that NVC intends to accept payments (including by mail, if necessary) and to credit that step as “seeking to acquire” the visa for purposes of locking in the child’s derivative eligibility under the Child Status Protection Act. It seems likely, however, that going forward (for petitions approved after May 1, 2015), the NVC will not send out fee bills unless the investor’s priority date is before or near to the cut-off date.  Investors wishing to “lock in” a child’s age for CPSA purposes should proceed to pay the fee bill when sent, or to file with USCIS for adjustment of status promptly after I-526 approval if a visa number is available.

Investors should consult their immigration counsel about the complex technicalities of the CSPA and related issues.