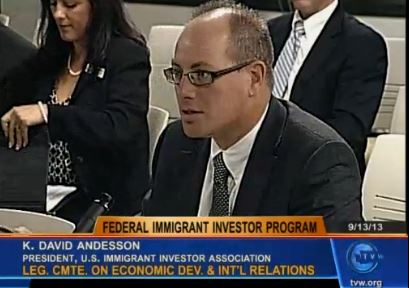 Last week, we reported on IIUSA President David Andersson speaking role at the Guangdong Exit/Entry Association global immigration conference, November 21-23. By all reports, the conference was a resounding success as migration agents and investors learned about the benefits of investing in EB-5 projects and also due diligence measures that can be taken to protect themselves and their potential immigration benefits.

On the sidelines of the conference, President Andersson had a sit down interview with Shenzhen Satellite Television, which reaches 400 million people in 35 mainland provincial capitals, municipalities and cities as well as Hong Kong, Macao and Taiwan. In the interview, Andersson talked about IIUSA’s role as the trade association for the EB-5 Industry and its work to endorse the permanent reauthorization and continual improvements of the EB-5 Program. President Andersson’s message was primarily catered to EB-5 stakeholders in China and so he also touched upon the importance of due diligence on behalf of the migration agencies/investors and how IIUSA’s mainland (migration agent) members are those who are committed to helping investors find suitable EB-5 investments while also helping them with the subsequent EB-5 filing processes.

We will provide you with the video link as soon as the interview airs live on Shenzhen TV!

View a full transcript of the interview here