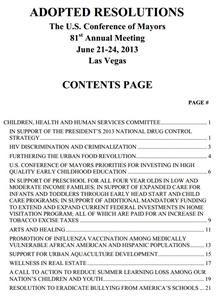 The EB-5 Immigrant Investor Program was spoken in high regard at the 81st U.S. Conference of Mayors Annual Meeting in Las Vegas this past June.  In the meeting’s Adopted Resolutions, the mayors recommend that Congress advance the EB-5 Program within comprehensive immigration reform and that they also allocate more visas towards the Program.

The section on EB-5, found on page 69 of the Adopted Resolutions (click on the link below for a copy), details a brief history of the Progam and its impact on the United States economy since it was established by Congress in 1990.  The Resolution states that EB-5 has since become a vital source of urban redevelopment funds and that since 2005, over $4.7 billions have been invested through the Program, generating 95,000 American jobs.

The Resolution articulates that 40 additional Regional Centers have been approved in Fiscal Year 2013 alone, and there are currently 7,000 pending applications for EB-5 related visas, representing $3.5 billion in potential direct investment and 70,000 American jobs. It also states that mayors are working with private parties to use EB-5 foreign direct investment to finance job creating projects and downtown revitalization projects.

The EB-5 Immigrant Investor Program section of the Resolution concludes with the following affirmation: “The United States Conference of Mayors urges Congress to include a robust EB5 program in the immigration bill including additional visas, permanent authorization of the regional center program and streamlined approvals for all applications.”

Big thank you for Akerman Senterfitt, LLP (IIUSA member) for all of their essential work in building synergies between IIUSA and the Conference of Mayors!