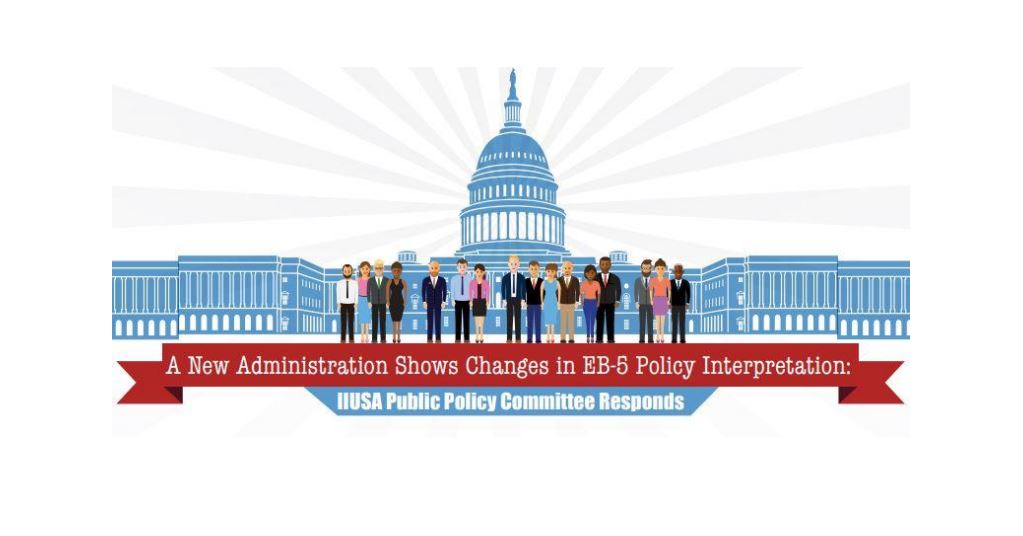 2017 has been a busy year for EB-5 in Washington D.C., and IIUSA’s diverse deliberative body, the Public Policy Committee (the “PPC”), has been hard at work. Below is a summary of the committee’s work this past year:

In June, the U.S. Citizenship and Immigration Services (“USCIS”) released an update to its Policy Manual (the “Manual”) in Volume 6, Part G in relation to “Job Creation and Capital At Risk Requirements for Investors”. As we learned recently from the Citizenship & Immigration Services (CIS) Ombudsman report to Congress, mainland Chinese investors are navigating through the EB-5 process for an estimated 10 years. It is unclear if an investor’s investment is required to remain “at risk” both after the requisite two years passes and if the requisite job creation requirements are met. In the case of a potential capital liquidation event, having investments roll into multiple projects that, in some cases, are not specifically contemplated at the time of the initial investment had left a door wide open for unnecessary risk.

IIUSA believes that USCIS lacks authority to make Program policy changes via revision of a policy memo, and these changes must result from legislation, regulations, or precedent court decisions. Nonetheless, the PPC responded to address policy interpretations and to recommend changes to avoid any ambiguities or unintended consequences.

One major issue that was addressed in the Manual change was whether or not invested capital was mandated to remain at risk after the period of conditional residency. IIUSA questioned the premise that the investment would need to remain at risk after job creation requirements were met. If still required to be at risk, IIUSA argued that, if USCIS considers municipal bond positions to be an investment that is “at risk”, it follows that even bank accounts and U.S. Treasury obligations are at risk because they provide opportunity for gain and risk of loss. Other investments that should qualify as “at risk” include investments in real estate investment trusts, or money market accounts, which were shown to carry significant risk during the 2008 financial crisis.

Most importantly, USCIS should consider the real-life hurdles that come with compliance of the new policy. Practically, it is impossible to redeploy immediately as NCE managers seek the appropriate investment vehicle for redeployment, and there should be flexibility for a timeframe that is considered within reason. Regional Centers should also be allowed to make amendments to their private placement memorandums (“PPMs”) to comply with updated Manual requirements without the amendment being considered a material change, which would put all current EB-5 investors at risk.