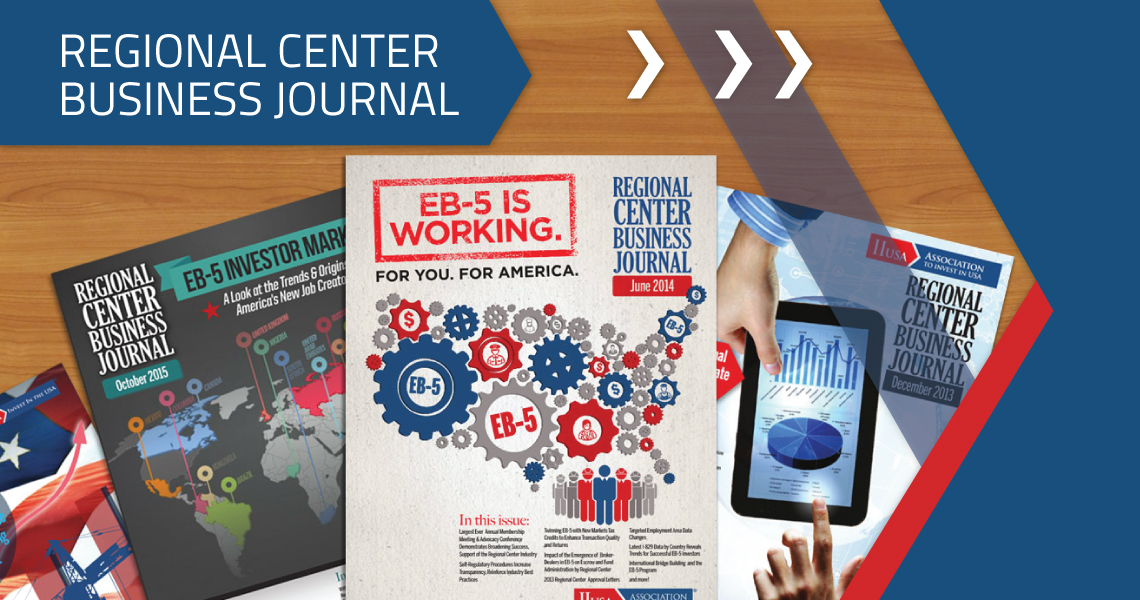 by Spencer McGrath, Attorney, Boundary Bay Law Corporation
USCIS recently published a memo to EB-5 stakeholders reminding them that the terms “United States,” “U.S.” “US” and “Federal” must not be used as part of a regional center’s name because such use may constitute false advertising by falsely implying a relationship with federal agencies. As the market for immigrant investor capital becomes more crowded, there may be an additional reason not to use these words: they impair a regional center’s eligibility to register its name as a trademark with the US Patent and Trademark Office (“USPTO”).

Only 10,000 immigrant investor (and dependant) visas can be issued in a fiscal year. The theoretical maximum amount of capital that can be raised under this cap is surely much less than the total amount needed by the over 700 approved regional centers. Thus, regional centers will need to distinguish themselves from competitors to effectively compete for investor capital. A robust and well-protected trademark may provide one such distinguishing feature.
A trademark is any “word, name, symbol, or device, or combination thereof ” that indicates the source of goods or services and distinguishes the goods or services from those provided by another. In the marketplace, trademarks protect a business’s goodwill and reputation by preventing others from using similar words, slogans, symbols, or designs that are likely to confuse consumers, or that weaken or tarnish the trademark. Registration with the USPTO, while not required for trademark ownership, provides the registrant with several key benefits.
First, common law trademark protection is limited in geographic scope to the places where the trademark is actually used. Federal registration, however, provides nationwide protection.
Second, federal trademark registration in the United States gives the registrant priority when filing for trademark protection in many foreign countries where investors may reside. US registration may also give rise to presumptions as to rights abroad. Common law rights and state level registrations do not typically allow a registrant to claim priority dating back to US use when filing later in a foreign country.
Third, federal trademark registration gives the registrant the right to enforce its trademark in federal court, along with several useful presumptions including valid ownership and a right to exclusive use.
Finally, registration with the USPTO gives the trademark owner public notice of ownership, assurance that conflicting marks will not be registered, the right to use the “®” symbol with the mark, and seizure of infringing goods by Customs and Border Protection.

Roadblocks to Registration When “US,” “United States,” or “Federal” is Part of the Name

a) It is the same as, or close approximation of the name used by a government agency,
b) Points uniquely and unmistakably to a government agency,
c) It is owned by a party not connected to the agency, and
d) Would cause a connection to the agency to be presumed.
Use of “federal” increases the likelihood of a finding of deceptiveness. For example, a Google search for “Federal Regional Center” yielded a link to fema.gov as the first two hits. As USCIS has already admonished the use of “Federal,” including this term as part of a regional center’s name is likely to satisfy the factors above, thus impairing, if not disqualifying, the trademark from registration.
DESCRIPTIVENESS
“Descriptiveness” restricts a trademarks eligibility for registration as well. Trademarks that merely describe the goods and services offered cannot be registered. Similarly, geographically descriptive trademarks cannot be registered either. “America” and “American” may be geographically descriptive depending on:
1) The type of goods or services offered in connection with the trademark,
2) The actual geographic origin of the goods or services, and
3) The overall commercial impression engendered by the mark at issue.
If these terms are used in a way that primarily denotes the United States origin of the goods or services, then the term is primarily geographically descriptive. Given the nature of the regional center industry, the terms “US” and “United States” would likely be considered geographically descriptive for the same reasons as “America” or “American.”
ON A RELATED NOTE: THE US FLAG
Stylized US flag designs are a popular choice for regional center trademarks. While such designs may be registered, any trademark that consists of or comprises the flag or coat of arms or other insignia of the United States is ineligible for registration. Even stylized flag designs must meet at least one of the following criteria to be eligible for registration:
* The flag design is used to form a letter, number, or design,
* The flag is substantially obscured by words or designs,
* The design is in a shape not normally seen in flags
* The flag design appears in a different color from that normally used in the national flag, or
* A significant feature of the flag is missing or changed.
Since these factors are subjective, regional centers should exercise caution when deciding to use a stylized flag as part of their trademark.

By heeding USCIS’s warnings, regional centers can increase the likelihood that their names can be registered as trademarks with the USPTO. Since registration provides several features that allow regional centers to protect their image and reputation in the investor marketplace, federal trademark registration may be a valuable asset, especially when competing for a finite amount of investor capital. By choosing names that avoid geographic descriptiveness or falsely suggesting a connection with a federal agency, regional centers have a better chance of maintaining their competitive edge.
RCBJ Retrospective articles are reprinted from IIUSA’s Regional Center Business Journal trade magazine. Opinions expressed within these articles do not necessarily represent the views of IIUSA and are provided for educational purposes.
← RCBJ Retrospective: Emerging EB-5 Markets Spotlight- Russia USCIS Posts Annual Reporting Information & Filing Tips for Form I-924A, Supplement to Form I-924 →