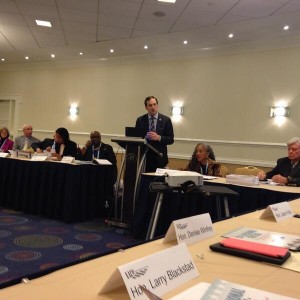 IIUSA earned an important vote of public support this past weekend as the National Association of Counties (NACo) Community, Economic Development and Work Force Steering Committee unanimously approved a resolution supporting IIUSA, which was subsequently adopted and approved on Monday, March 3, 2014 by the full NACo Board of Directors. These approvals signify NACo’s full support of IIUSA’s EB-5 legislative initiatives as a formal part of NACo Legislative and Program and Policy agenda and set the stage for IIUSA EB-5 working panel presentations in multiple future NACo meetings. NACo represents over 3,500 Counties Nationwide and counts nearly 35,000 local elected officials among its membership.

This engagement is part of IIUSA’s continued coalition building initiative with organizations that have a public mission that overlaps with IIUSA’s interests. Following a 2012 resolution in support of permanent authorization of the EB-5 Regional Center Program, in June 2013 the U.S. Conference of Mayors (USCOM) adopted a resolution in favor the EB-5 Program affirming, “The United States Conference of Mayors urges Congress to include a robust EB5 program in the immigration bill including additional visas, permanent authorization of the regional center program and streamlined approvals for all applications.” The section on EB-5 of the adopted resolutions document begins on page 69.