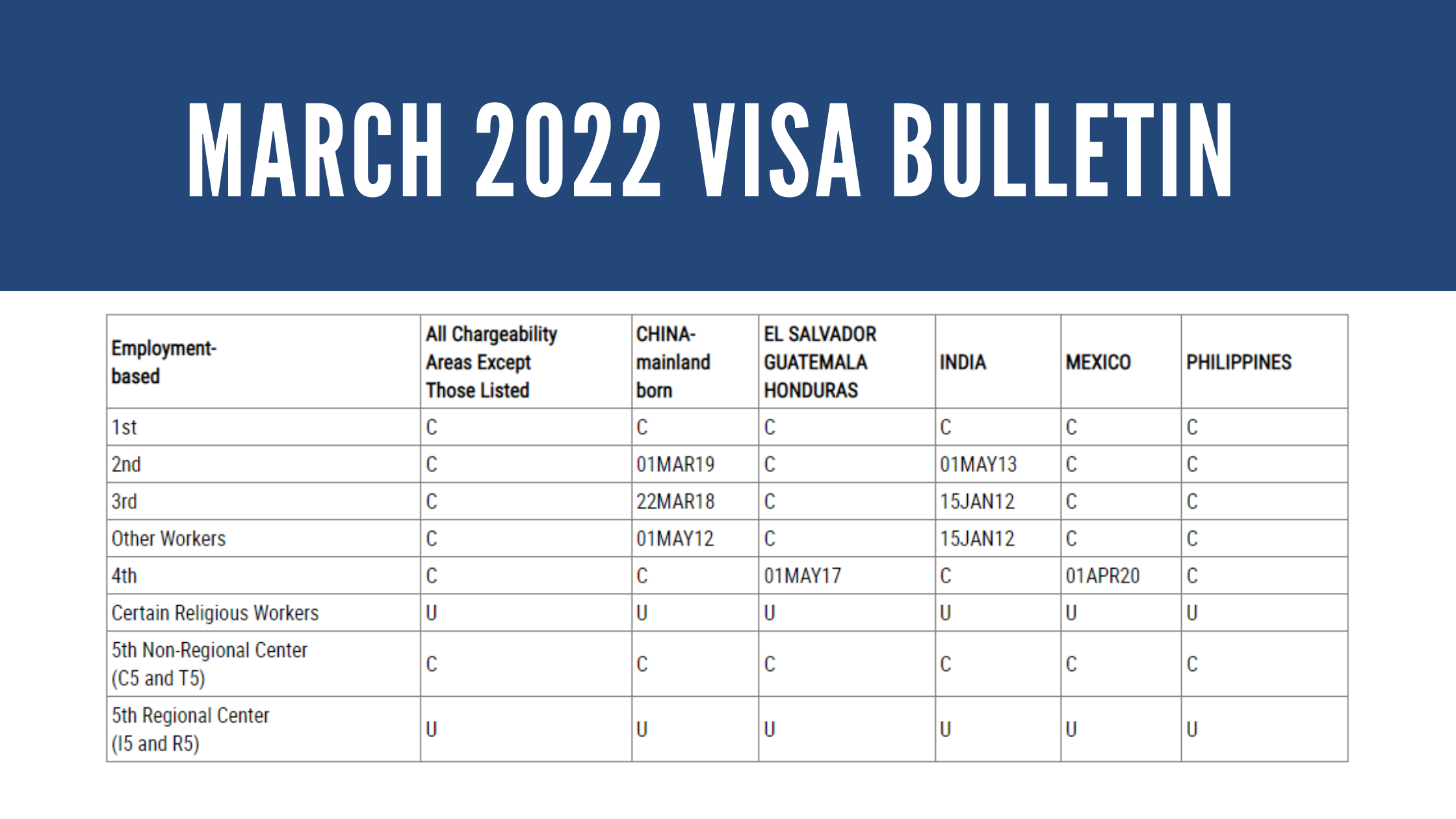 The U.S. Department of State has published the monthly Visa Bulletin for March 2022.

Congress is expected to pass a “clean” continuing resolution and keep the U.S. federal government funded through March 11, 2022. Without congressional reauthorization of the Regional Center Program, the final action dates for EB-5 applicants who have invested via a regional center will remain as “unavailable” for March, while the cut-off dates for direct EB-5 applicants across the world will continue to be “current” in the upcoming month. However, should any legislative action reauthorize the EB-5 Regional Center Program in March, the final action dates for all visa applicants who made their investment through a regional center would become “current” (except for the investors from mainland China whose cut-off date would become November 22, 2015).

EB-5 DATES FOR FILING (CHART B)

In March, the dates for filing for EB-5 visa applicants who have invested through a regional center will remain unchanged from the dates in February.

However, USCIS will continue to reject new Form I-485, Form I-796 and Form I-131 associated with an EB-5 Regional Center until the Regional Center Program is reauthorized by Congress (see USCIS alert notice here).

For all visa applicants affiliated with a direct EB-5 project, the dates for filing continue to be “current” in March 2022. That is, qualified EB-5 applicants who invested in a direct EB-5 project, regardless of his or her country of birth, continue to be able to file an adjustment of status application to USCIS in January as soon as their I-526 petition is approved without any delay.

* See below from the March Visa Bulletin regarding the visa availability outlook for the upcoming months:

Division O, Title 1, Section 104 of the Consolidated Appropriations Act, 2021 extended the immigrant investor pilot program until June 30, 2021.  No I5 or R5 visas may be issued overseas, or final action taken on adjustment of status cases after June 30, 2021.

The final action dates for the I5 and R5 categories have been listed as “Unavailable” for February.

If there is legislative action extending this category for March, the final action dates would immediately become “Current” for March for all countries except China-mainland born I5 and R5, which would be subject to a November 22, 2015 final action date. It may also become necessary to establish a China-mainland born final action date and application filing date for the C5 and T5 categories as early as April to keep number use within the maximum allowed under the FY-2022 annual limits. In addition, if sufficient demand materializes in the Employment-based Fifth Preference category, corrective action may need to be taken in the India Employment-based Second Preference category, which would have utilized any otherwise unused numbers from the Employment-based Fifth Preference.

The Visa Bulletin indicates that direct EB-5 applicants from mainland China may be subject to a final action date and a date for filing in the upcoming months. It’s wise that the visa applicants who become documentarily qualified should act as quickly as possible to secure their EB-5 visa allocation when the cut-off dates are “current” during February and March.