This week, A.T. Kearney released its 15th annual Foreign Direct Investment Confidence Index (view PDF), which ranks countries based on how changes in their political, economic, and regulatory systems are likely to affect foreign direct investment inflows in the coming years. For the third consecutive year, the United States took first place as it leads all countries in terms of macroeconomic outlook. Among surveyed business executives, 46% say they are more optimistic about the U.S. economy’s outlook than they were a year ago.
The top five countries in order of confidence index ranking are: 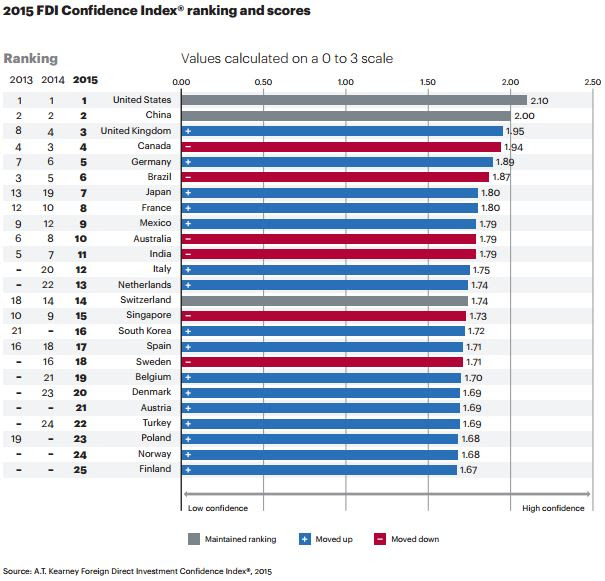 About the Study
Over its 17-year history, there has been a strong correlation between the rankings and global FDI flows. Since its inception, countries ranked in the Index have consistently received at least half of global FDI inflows roughly one year after the survey.
The 2015 A.T. Kearney Foreign Direct Investment (FDI) Confidence Index® is constructed using primary data from a proprietary survey administered to senior executives of the world’s leading corporations. Respondents include C-level executives and regional and business heads. The participating companies represent 27 countries and span all sectors. To reflect the increasing influence of developing markets in FDI, this year more than one-third of respondent companies were headquartered in developing countries. The survey was conducted in January 2015.

The Index is calculated as a weighted average of the number of high, medium, and low responses to questions of direct investment in a market over the next three years. Index values are based on non-source-country responses. For example, the Index value for the United States was calculated without responses from U.S.-headquartered investors. Higher Index values indicate more attractive investment targets. The sample of countries included in the survey accounts for approximately 90 percent of FDI inflows.

DI flow figures are the latest statistics available from the United Nations Conference on Trade and Development (UNCTAD), and all 2014 FDI figures quoted are estimates. Other secondary sources include investment promotion agencies, central banks, ministries of finance and trade, and other major data sources.

For past editions of the FDI Confidence Index, please go to www.atkearney.com/gbpc/foreign-direct-investmentÂ­confidence-index.