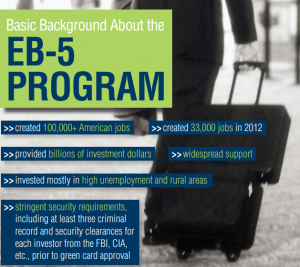 On March 25th, the American Immigration Lawyers Association(AILA), in conjunction with IIUSA, released a report titled “Basic Background About the EB-5 Program”.

The four page overview cites the IIUSA-commissioned Economic Impact Study from 2010-2011, which showed the EB-5 Regional Center Program to have supported 28,000 jobs and contribute $2.2 billion to US gross domestic product (GDP). The 2010-2011 EB-5 Economic Impacts Report is available to members, free of charge. In February 2014, IIUSA released the Fiscal Year 2012 Economic Impacts Report which found the EB-5 Program contributed $3.39 billion to U.S. GDP and supported over 42,000 U.S. jobs during fiscal year 2012, while generating over $712 million in federal/state/local taxes. This is more than a double the annual impact reported for 2011. To purchase this report for $49.50 (Nonmembers $99), visit the IIUSA Marketplace.

The AILA/IIUSA Report also draws attention to the widespread, bi-partisan support for the EB-5 Program across the nation, epitomized by a resolution passed by the US Conference of Mayors in 2013, urging Congress to “include a robust EB-5 program in the immigration bill, including additional visas, permanent authorization of the regional center program and streamlined approvals for all applications.”

Lastly, the report includes an “EB-5 flow chart” demonstrating the stringent security requirements of the EB-5 Program, which includes at least three criminal record and security clearance for each investor from the FBI, CIA, and other agencies prior to green card approval.

This brief report on the EB-5 Program is an important advocacy tool to to demonstrate the continued positive economic impact that the EB-5 program is having on diverse communities around the U.S. while also showing that the process for obtaining includes rigorous security requirements on the investor to on general background and source/path of funds.